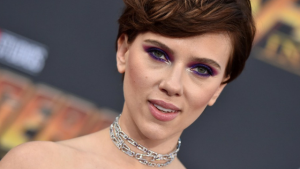 Scarlett Johansson, who’s not exactly a MAGA-hat sporting enemy of political correctness, has found herself in the crosshairs of the left-wing Thought Police more than once over the last few years.

First, she was given a role in Ghost in the Shell which people on the left thought should have been played by an Asian person, even though the character it was based on was actually a robot in the original graphic novel.

The film is called “Rub and Tug” and is as low-brow as it sounds: it’s about a gangster who ran a chain of massage parlors.

“Directed by Rupert Sanders, the film is based on the life of Dante ‘Tex’ Gill (to be played by Johansson), who ran an empire of massage parlors in Pittsburgh’s underground sex industry in the 1970s,” writes a very ruffled HuffPo. “While Gill’s gender identity has been described differently in various publications, most believe the crime boss identified as transgender.”

Johansson, a “cisgender” woman, is all wrong for this role, in the view of the left, because, you see, she doesn’t live her life dressed up as a man. She only gets paid millions of dollars to dress up like a man for a movie.

Her response, however, was pretty epic and admirable, given through her publicist to Bustle:

“Tell them that they can be directed to Jeffrey Tambor, Jared Leto, and Felicity Huffman’s reps for comment.”