Saudi Arabian Women Get Behind the Wheel for the First Time 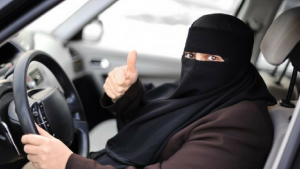 For the first time on Sunday, Saudi Arabian women were allowed to legally get behind the wheel.

Oh, that’s right–although some American women may lead you to believe that oppression is rampant in the United States, in the most prosperous nation in the Muslim world, women literally just got the right to get driver’s licenses.

In September 2017, as part of an ongoing plan of reformation, Saudi Arabia’s Crown Prince Mohammed bin Salman issued a decree to lift the ban on women driving in the middle eastern nation.

On Sunday, the ban was officially lifted.

Social media has been flooded with photos and videos of Saudi women driving freely for the first time, and according to Saudi Arabian Ministry of Interior spokesman Mansour Al-Turki, over 120,000 women have submitted applications for licenses.

Saudi Arabian women, who still have significantly fewer rights than their male counterparts and face decidedly more actual oppression than women in the West, have been fighting for decades for the right to obtain drivers’ licenses, which still require a male “guardian.”

While this is, of course, a great victory for women’s rights, here is a short list of everything Saudi women still cannot do (from The Independent):

Perhaps all those young ladies who like to dress up like characters from The Handmaid’s Tale, the dystopian novel about an oppressive, patriarchal culture by Margaret Atwood (or, if you’re under the age of 35, the Hulu series), should redirect their protests to a Saudi Arabian embassy, what do you say?