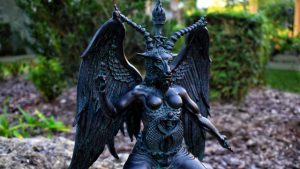 So the Satanic Temple isn’t too happy with the state of Mississippi, threatening to sue them if they go through with plans to put “In God We Trust” on the state flag.

Just when 2020 couldn’t get any wilder, along come angry Satanists openly attempting to defy the God of all creation and those who want to show Him respect and honor. This is just getting to be too much, y’all.

Republican Mississippi Gov. Tate Reeves signed legislation last month establishing a nine-member commission to redesign the state flag with the phrase “In God We Trust” and without the Confederate flag.

Describing his law firm as one that “proudly serves as First Amendment Counsel to the Satanic Temple,” First Amendment lawyer Marc J. Randazza of Randazza Legal Group wrote in a recent letter to the attorney general of Mississippi that his client “has asked us to bring an issue of constitutional importance to your attention.”

We understand that your state is planning to take the very positive step of removing the Confederate battle flag from the Mississippi state flag. However, it is our understanding that the proposal calls for it to be replaced with “In God we Trust”, a proposal you seem to endorse. While the Satanic Temple supports the removal of the Confederate flag, removing one divisive symbol of exclusion only to replace it with a divisive phrase of exclusion does not eliminate exclusion, but rather moves it from one group to a collection of others.

Now, you might be thinking how nutty this situation is, but it’s about to get weirder. Stick with me here.

Randazza then offered his client, the Satanic Temple’s, suggestion that if they decide to make any mention of religion on the flag, they should mention Satan too.

“Before you hand wave this idea away,” the attorney wrote, “I would like to draw your attention to the seven tenets of the Satanic Temple.”

This man, with a straight face, goes on to mention how the seven tenets of the Satanic Temple are “more consistent with Mississippian values than even the Ten Commandments.”

Did you ever dream of the day when openly practicing satanists would brazenly attempt to say that the tenets of their religion are more moral than God’s? And then attempt to have him recognized on the state flag? The father of lies. The master of all evil. What kind of insanity is happening here?

Interestingly, Randazza has represented Alex Jones, and the founder of the neo-Nazi website the Daily Stormer.

Anyone else just ready for this year to be over with? How much crazier is this ride planning to get? I’ve had just about enough.