Sarah Sanders Is Right: Trump is an “Equal Opportunity Insulter” 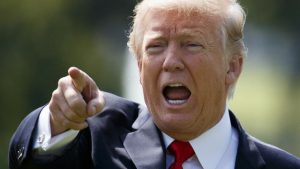 I don’t care if you vehemently hate Trump, totally love him, or land somewhere in the middle, it’s simply dishonest to attribute his insults to the insultee’s gender, race, or anything else.

When it comes to the way Trump talks about people, he has two modes: either they’re the greatest people ever or they’re just awful. There is no in-between.

This is why when Trump is trying to make nice with tyrannical dictators and corrupt oligarchs like Kim Jong Un and Putin, he can’t help but praise them to the sky. It’s as if he has no idea how to be moderate. You’re either “wonderful” or “a dog”, in Trump’s eyes, and, in the case of Putin, Un, Omarosa, and many, many others, you’re often both, depending on what mood Trump is in that day.

It’s becoming yawn-worthy every time the media try to claim that Trump’s insults hurled at his critics are either “racist” or “sexist”, because if you pay attention to the way Trump speaks for five seconds you’ll see he insults people regardless of gender, sexual orientation, physical abilities, ethnicity, or anything else.

When it comes to hurling insults and creating offensive nicknames for his critics, Trump is a true egalitarian. A champion of equal-opportunity-insults. So much so, that even his Press Secretary pointed this out to the press this week as they went through their usual uproar over his calling former staffer Omarosa a “dog.”

.@PressSec Sarah Sanders: "The president's an equal opportunity person that calls things like he sees it. He always fights fire with fire and he certainly doesn't hold back on doing that across the board."

The Daily Wire‘s Ben Shapiro, who has no problem criticizing the President and never has, wrote a lengthy column this week in which he reminded us of all the times Trump has called white men “dogs.” In fact, Shapiro argues, it appears to be a favorite insult of the President and suggested that perhaps he should spend a little more time around dogs on his podcast Tuesday, as POTUS clearly seems to have some sort of issue with them.

We are not entirely clear on why Trump thinks that dogs get fired so often, but it’s pretty clear this insult has nothing to do with Omarosa’s ethnicity or gender.