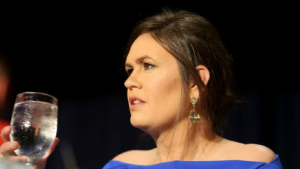 If there is one thing the left hates, it’s conservative women. And on Saturday night, they really outdid themselves.

Sarah Sanders, as Trump’s tough and steely-faced press secretary, has joined a long line of women who get routinely slammed by the so-called “feminist” progressives who can’t stand the idea of a woman who doesn’t fall in line with their groupthink. Phyliss Schlafly, Ann Coulter, Michelle Malkin, and Sarah Palin are all very familiar with the bashing Sanders is subject to each and every day in her capacity of one of the most powerful women in the White House.

But when Sanders had to sit through her own roasting at the White House Correspondents’ Dinner over the weekend, she made an epic display of the poise and composure she has come to be known for as stands before the overwhelmingly left-wing White House press pool each and every day.

Michelle Wolf, who you may recognize from….well, we’re actually not really sure who the heck she is but at any rate, a comedienne who was apparently worthy of inviting to host the annual press dinner was the one doing the roasting.

The dinner is meant to be a celebration of the free press and typically features banter and jokes about the current administration, and as you can probably guess, has always been much easier on Democratic presidential administrations than Republican. But Ms. Wolf had even the left shaking their heads with her brutal roasting of Mrs. Sanders, which CNN called “cringeworthy…at best,” live on air.

Sanders attended the dinner in place of President Trump, who opted not to attend for the second year in a row.

“I have to say, I’m a little starstruck,” Wolf quipped. “I loved you as Aunt Lydia in the ‘Handmaid’s Tale.’”

The camera then panned to Sanders, who clearly didn’t think the joke was funny. But Wolf continued.

“Every time Sarah steps up to the podium, I get excited because I’m not really sure what we’re gonna get. A press briefing? A bunch of lies? Or divided into softball teams?” Wolf said, adding in a deep voice to mock Sanders: “It’s shirts and skins and this time don’t be such a little b**ch Jim Acosta.”

“I actually really like Sarah. She’s very resourceful. Like she burns facts and then she uses that ash to create a perfect smokey eye. Like maybe she’s born with it, maybe it’s lies,” Wolf said. “It’s probably lies.”

Throughout the entire “roasting,” Sanders was visibly uncomfortable and appeared almost upset.

To note, Sanders attended the event as an official representative of the Trump administration since Trump chose not to attend the event himself. This meant Sanders was sitting at the main dinner table just seats down from Wolf’s lectern.

Across Twitter, Sanders was praised for her poise and class as she sat, stony-faced, staring at Wolf as she unleashed her humor-devoid, vitriolic hate on the press secretary, one commenting that she “personified professionalism”.

.@PressSec Sarah is all class and the definition of strength compassion confidence and competence. She is a role model for handling nonsense and snark.

You might think that the journalists who clash with Sanders every day in the White House may have been the only ones to enjoy her pain, but even they didn’t appreciate Wolf’s bashing and came to Sanders’ defense:

That @PressSec sat and absorbed intense criticism of her physical appearance, her job performance, and so forth, instead of walking out, on national television, was impressive.

The spirit of the event had always been jokes that singe but don’t burn. Reporters who work with her daily appreciate that @presssec was there. https://t.co/PorH9jGJ7G

When you have legacy media White House journalists shaking their heads at you, you know you’ve gone too far.