Sarah Sanders Hits Back at CNN Lawsuit Over Jim Acosta 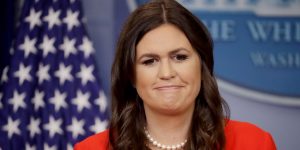 Jim Acosta doesn’t even have to be in the room for Sarah Sanders to expertly shut him down.

This week, CNN filed suit after their insufferably self-obsessed White House correspondent got his press credentials revoked for refusing to hand the microphone over to an itty-bitty intern who was being directed by the President to allow another reporter to have a question.

This morning, CNN filed a lawsuit against @realDonaldTrump and top aides. The White House has violated CNN and @Acosta's First Amendment rights of freedom of the press and Fifth Amendment rights to due process. Complaint: https://t.co/43oX6L8xA7 pic.twitter.com/RvJ0Cgh6oi

Sanders, in a statement, summed up perfectly what CNN is doing:

“This is just more grandstanding from CNN, and we will vigorously defend against this lawsuit,” Sanders said.

“CNN, who has nearly 50 additional hard pass holders, and Mr. Acosta is no more or less special than any other media outlet or reporter with respect to the First Amendment,” Sanders’ added.

If anyone knows how little of Jim Acosta’s beat at the White House has to do with actual reporting, it’s Sarah Sanders, who is routinely interrupted by attention-wh*re Acosta, that is, when he’s not arguing with, talking over, or mansplaining to her.

“The White House cannot run an orderly and fair press conference when a reporter acts this way, which is neither appropriate nor professional,” Sanders said. “The First Amendment is not served when a single reporter, of more than 150 present, attempts to monopolize the floor.”

Jim Acosta and CNN can, of course, write, say, air, and publish whatever they want, so their rights are clearly intact.

What the American people apparently do not have is a right to not hear from Jim Acosta.