Sarah Palin Responds To Questions About A Return To Political Office 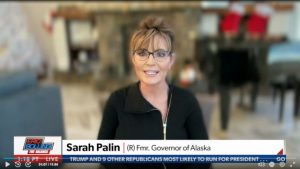 Sarah Palin, the former governor of the state of Alaska and the 2008 running mate for Sen. John McCain’s bid for the presidency, has stated that she would love to return to political office.

Palin made an appearance on Eric Bolling’s Newsmax program on Wednesday where she was asked about whether or not she would ever return to public office.

Palin responded by saying, “I would love to. I would never say never.”

Palin, who has not shied away from hot-button issues, maintained that when it comes to vaccines, “natural immunity” has shown to be “27 times more” effective.

On transgender athletes, Palin maintained that it’s “not fair” to expect women to compete against biological men.

Finally, Palin said when it comes to Democratic West Virginia Sen. Joe Manchin, who the former governor cites as a “good man,” she stated that he did the “right thing” in opposing the $1.75 trillion Build Back Better Act. Manchin cited, as part of his reasoning for voting no on the bill, concerns that the bill’s top-line figure would further raise inflation.

The left really treated Palin badly during the 2008 presidential election, constantly poking fun at her and making the assumption she was ditzy due to the way she talked.

Which just goes to show you that the left is only pro-woman when the woman in question is part of the Democratic Party.

What do you all think? Should Palin come back to public office?