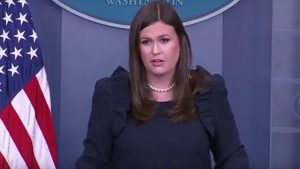 Liberal comedian Michelle Wolf recently gained her fifteen minutes in the spotlight — she’s apparently the host of an upcoming Netflix show, but until now, it doesn’t seem a whole lot of folks knew who she was — by trashing the Trump administration during the White House Correspondents’ Dinner. Apparently she went to the Kathy Griffin School of Bad Comedy.

Press Secretary Sarah Huckabee Sanders has fired back, but the ammunition she used in her response wasn’t fighting fire with fire, but was seasoned with pure grace.  I don’t think we’d expect anything less.

In fact, the response was so good, it’s going viral.

During the dinner, Wolf took the opportunity she had to speak and used it to deliver veiled insults implying Sanders was ugly and fat.

Despite being verbally slapped by a moral degenerate aiming for low hanging fruit in an attempt to get cheap laughs, Sanders stated she wasn’t angry, but was “praying” for Wolf.

A reporter for the Daily Caller spoke with Sanders and a few of her staffers at the afterparty for the event where they stated that if the attacks became too personal she was committed to leaving, which is why they were so surprised to see she stuck around.

“I don’t know how she does it. She kills them with kindness — she puts up with it. Good-hearted American people see that — and then she wins,” a Sanders staffer said.

Benny Johnson, the reporter who spoke with Sanders later recounted her own take on the incident:

“Then, Sarah Sanders walks into the party. The MSNBC party. A network that lives to savage and promote the godless vitriol that just attacked her. Guess what? Sarah Sanders was smiling. She owned it,” Johnson wrote. “I asked her about the attack and she shrugged with a smile and just said the attacks didn’t bother her and that she’s praying for the comedian.”

Hard to overcome that one.

This, ladies and gentlemen, is what class, dignity, and grace look like. By getting in the mud with liberals over trivial matters like insults all we do is lower ourselves to their level.

Sanders has demonstrated there is a much more gracious, effective way to handle the junk these folks spew without allowing it to darken our own souls, and that’s worth far more than the false satisfaction one gets from trading insults.

Be sure to subscribe to The Chad Prather Show podcast where they are available and join Chad at his live Star Spangled Banter Comedy Show in a city near you.  It’s a great reminder that so-called “comedy” doesn’t have to be mean-spirited. Visit Chad’s tour website at watchchad.com 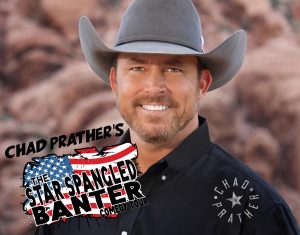