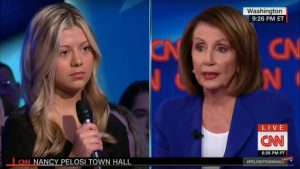 CNN held a town hall event on Wednesday featuring House Minority Leader Nancy Pelosi who seemingly met her match in the form of a teenage survivor of the Santa Fe High School shooting, getting completely obliterated by one question.

The teenager asked Pelosi why she is against armed guards in schools, especially when her own building is protected by guards.

As you can imagine, Pelosi had a real hard time logically answering this question, and strangely enough, CNN host Chris Cuomo actually pressed her to answer the question.

“Where does the government stand on arming and training our teachers, much in the way we use air marshals on airplanes?” asked Santa Fe senior Alexis Wilson.

“Following a tragedy like this all we want to do is pray for the families, but I do not support arming teachers and the rest,” Pelosi stated.

Cuomo, moderating the town hall event, pressed Pelosi about her seeming hypocrisy on the issue.

“There’s a little bit of an either-or problem with how we’re trying to approach solutions. … The building we’re in now, the building you work in, the point of entry there is secure,” he said. “You don’t walk in with a trench coat with a shotgun underneath your jacket, and get in. It doesn’t happen, you know this.”

The CNN cameras panned to Wilson in the audience, who was clapping to show support for Cuomo’s pushback.

“Why can’t that be part of the equation?” Cuomo asked. “Talk about universal background checks, fine. Talk about mental health, how to identify them, money for treatment. But why either-or? Why not make the schools safer?”

“The children should not have to be worried about going to school as a place that violence can occur,” Pelosi responded. “You have to get to systemically stop people from having guns who shouldn’t have guns in the first place.”

That’s a strange last comment, wouldn’t you agree? It seems as if Pelosi is tossing to the side actionable steps that can be taken right now, today, to protect children in public schools, in favor of focusing attention on limiting the Second Amendment.

Isn’t this sort of an admission that, underneath all the rhetoric, the left really does want to take your guns? Kind of seems that way.

Why not do something that can be helpful right now and that will also preserve liberty? Unless, of course, the whole point is to have some sort of justification for taking away someone’s freedom.

Seems to likely be the case here.