Sanders, ‘Squad,” Plot To Push Biden To Be ‘Most Progressive President Since FDR’ 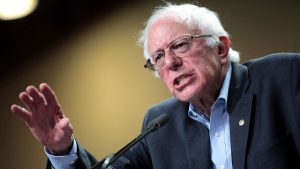 Sen. Bernie Sanders, a raging and totally unashamed socialist, recently conducted an interview where he stated that radical leftist lawmakers and supporters need to apply pressure to Democratic presidential nominee Joe Biden to “be the most progressive president” since President Franklin Delano Roosevelt.”

Well, that’s just totally terrifying, isn’t it? Joe Biden is already far, far too leftist, yet these folks want to push him over the edge into complete and total socialism and communism.

“Our first task we’ve got to defeat the worst president in modern history in this country and number two we organize our people to make sure that Biden becomes the most progressive president since FDR,” he said during an interview with a leftist group of freshman congresswomen who have become know as the “Squad.”

Some people ask what an old Jewish white guy has in common with young women of color like @AOC, @AyannaPressley, @IlhanMN and @RashidaTlaib.

We understand each other. We come from working class backgrounds. And we’re going to go forward together. pic.twitter.com/bANr9KbkmA

Those congresswomen — Reps. Ayanna Pressley, D-Mass., Alexandria Ocasio-Cortez, D-N.Y., Rashida Tlaib, D-Mich., and Ilhan Omar, D-Minn. — have allied with Sanders to push a number of left-wing proposals in Congress, including the Green New Deal and Medicare-for-All.

This year, the Squad backed Sanders’s primary campaign, which was ultimately beaten by Biden’s. Sanders conceded that Biden’s current proposals do not “go as far as we would want” but suggested they could push him to the left once he gets into office.

The Trump campaign has claimed that Biden will be dragged to the left if he wins the election on Tuesday — a claim Biden has denied repeatedly.

Sanders has been pushing hard to be given a cabinet position if Biden wins the White House, though at the moment, the Vermont senator told Politico his main focus is seeing Biden become president.

AOC has stated that she thinks young people will show up to vote for Biden, not because he’s someone they actually like, but because they think he can be pushed farther too the left.

“Right now young people are so clear on their stances on so many political issues that they believe that they want to vote for a president that is at least is going to be receptive to their advocacy, activism, and protests, frankly,” Ocasio-Cortez stated.

There you have it, folks. The real plan for Biden, should he win office on Election Day. Though it seems unlikely that Biden will remain in office for long due to his declining mental state.

Many individuals think that the plan is to get in, declare him incompetent to discharge his duties, and allow Kamala Harris to take over the Oval Office.

Given how easily shaped and influenced Harris is, that seems like a great plan for the “Squad,” as it will be super easy to push Biden’s current running mate to the left.