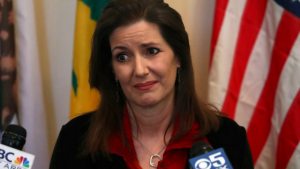 Do you remember Libby Schaaf, the Oakland mayor who tipped off hundreds of illegal immigrants that an ICE raid was planned in the city and warned them to get out of Dodge?

Well, it worked–the ICE raid was a failure and hundreds of illegal aliens, many of whom were known criminals (I mean, criminals beyond the whole living-in-the-country-illegally thing) and who would even go on to re-offend within a month of the tip off.

Schaff was, understandably so, harshly criticized for her reckless disregard for the rule of law, but like any good virtue signaling leftist mayor, she doubled down and has defended her decision to tip off illegal alien criminals, which ICE chief compared to that of a “gang lookout” tipping off gangsters when police come into the neighborhood.

The Trump administration as openly speculated as to whether or not they can actually prosecute Schaff for her blatant interference with ICE operations, but one congressman wants to make sure that she and any other sanctuary city or state officials who do so will be held accountable.

The Washington Times has the story on the proposed, and appropriately titled, “Libby Schaff Bill”:

Mr. King’s new bill would include a penalty of up to five years in prison for any state or local official who obstructs enforcement of federal laws.

“I want lawless, sanctuary city politicians to hear this message clearly: If you obstruct ICE, you are going to end up in the cooler,” Mr. King said in announcing his bill.

He said his bill would “remove all doubt.”

It’s about time the Federal government started making sure that the willful disregard for the security of our nation and our borders is punishable by law. It’s bad enough we have so many cities harboring criminals and tying LEO’s hands behind their backs when they encounter members of MS-13, for example, as Trump was told by a police chief last week, leading up to his controversial “animal” remarks about the notoriously violent gang.

Mayors should be interested in keeping their cities safe and prosperous, not turning into freak social experiments to up their political correctness points. Let’s hope this bill goes through!