San Juan Mayor Cruz is Nasty! But check out what else she’s wearing during Trump’s visit! 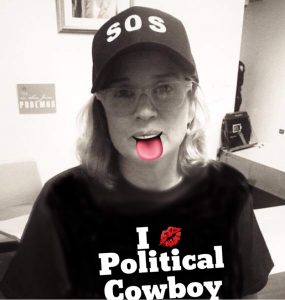 Democratic San Juan Mayor Carmen Yutin Cruz wants you to know that she is “nasty!” I think we can all agree with her.

Puerto Rico is suffering from the aftermath of two massive hurricanes in the span of two weeks.

The second hurricane to hit the island, Hurricane Maria, was a categorized as a level 5.

The people of Puerto Rico are suffering but instead of helping her community Democratic San Juan Mayor Carmen Yutin Cruz is out using non-stop network TV interviews to trash President Trump and FEMA and spreading lies about the hurricane relief.

Last week Mayor Cruz wore a “we are dying” T-shirt for her mainstream media interviews. In some interviews pallet loads of aid and supplies can be seen behind her. 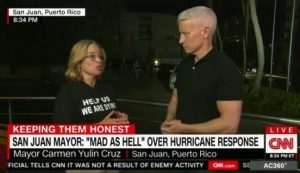 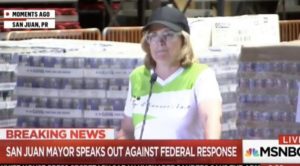 She has accused Trump of “genocide” in Puerto Rico. The grand total of deaths on the island of 3.5 million is 16. So maybe not quite.

When politics are involved, never let a good disaster go to waste.

In the midst of this Puerto Rican “apocalypse” the mayor has been able to take a break from the news cameras long enough to make new tee shirts displaying her political persuasion. As you’ll see in the picture below she managed to sum herself up nicely. 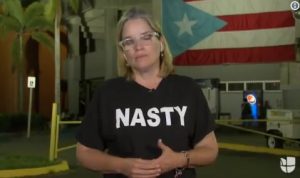 She did not, however, wear this apparel during Trump’s visit to the island opting instead for a sensible Hillary-esque pantsuit and…you won’t believe this…stiletto heels! Just weeks ago liberals were losing their minds over Melania headed to visit Texas in Harvey’s aftermath wearing similar footwear! 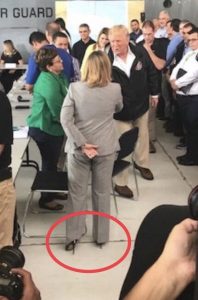 As for the tees, I think perhaps she needs to visit PoliticalCowboy.com and make a new shirt! Here’s a suggestion….