San Francisco’s Homelessness Has Gotten So Bad, The Bay May Soon Be Littered With Makeshift Boats and Poop 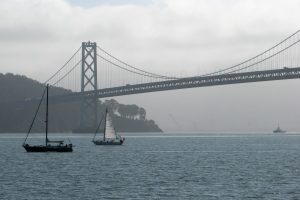 San Francisco’s homelessness population has gotten out of control, this isn’t news.

We periodically hear about the climbing rates of needles and human feces that litter the streets of the City by the Bay.

And is it that surprising? The city’s policies and ample social programs for the homeless and addicts seem almost designed to increase homelessness, but it’s starting to pose a serious public health risk.

It doesn’t take a particular degree of intelligence to realize that when your street is littered with poop, there’s going to be problems.

Well, problems there are, but while city officials seem unwilling to address the raging crisis, the homeless population of the city is seeking out their own solutions.

Pooping in the Bay and living on boats.

The Wall Street Journal reports that while the city has always had a population of people living on houseboats, as most major cities with sizable bays or bodies of water like Portland, Seattle, Vancouver, London, and Amsterdam do, but these aren’t your typical houseboat dwellers.

These makeshift barges, however, aren’t technically houseboats. They don’t pay to moor at a dock or sit anchored in a marina, and they aren’t specially constructed for year-round living (most have no heat, electricity, or sanitary facilities). They do, however, exist in a gray area in San Francisco’s laws; technically, boats anchored off-shore in areas of the bay restricted for recreational boating are legal, they just aren’t supposed to stay anchored for more than a few hours.

For San Francisco, the dinghies and barges pose a special problem: San Francisco Bay is a major port and shipping lanes criss-cross the bay. Boats that moor off the San Francisco coast run the risk of disturbing shipping routes or worse, getting caught in a battle for space with a much larger boat.

And that, of course, is not all.

Remember all the poop on the streets?

Well, where do you think that’s going to go as the homeless migrate to the Bay?

That’s right, right into the Bay.

There’s also the concern of pollution. Most of the makeshift vessels aren’t equipped with toilets, showers, or laundry facilities, so human waste is being dumped directly into the water, just off-shore of (arguably) the nation’s most eco-friendly city. San Francisco already has a problem with poop on its sidewalks, and the city fears it may, someday soon, have issues with poop in its water.

Now, this author is a San Francisco native, actually, and let me just tell you, there is quite a movement in the city to keep the already polluted Bay clean and the delicate ecosystems therein protected and preserved.

San Francisco is known as one of the hubs of environmentalism, after all, and many of its residents are tree-hugging, Sierra Club-donating, plastic-bag-phobic scolds.

And this, ultimately, is the conflict at the core of most of today’s progressive ideology. Those on the left want to both save the planet and give free handouts to those who don’t give a crap about the planet (but also don’t give a crap where they crap) and these two concerns have a hard time co-existing with current policies to favor both.

There are of course, sensible, conservative, free-market solutions to both these problems. To begin with, you can’t keep your city clean, safe, or environmentally friendly by encouraging a homelessness problem that is going to result in both over-crowding and pollution.

If taxes and minimum wages didn’t increase by the virtual minute in California and San Francisco, it would probably be a lot easier for employers and developers to provide entry-level jobs and affordable housing to better accommodate the housing needs of the city.

If the city didn’t hand out free needles for addicts, they, at the very least, wouldn’t literally be dousing gasoline on the raging fire that is our epidemic national opioid addiction.

But no, they’d rather kick all these cans down the road until the Bay is filled with poop.