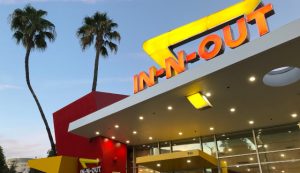 An In-N-Out restaurant in the city of San Francisco was shut down by the local government, temporarily, after they refused to enforce the city’s ridiculous vaccine mandate which requires all patrons to provide evidence that they have been vaccinated against the coronavirus.

A report published by the right-of-center news outlet Fox News said, “The San Francisco Department of Public Health closed the Fisherman’s Wharf In-N-Out location on Oct. 14 after the popular burger joint did not check the vaccination status of customers, which violates an August mandate from the city requiring indoor diners to show proof of vaccination.”

“In-N-Out, which operates 358 locations across the western United States, is owned by devout Christian Lynsi Snyder and is well known for including Bible verses at the bottom of soda and milkshake cups,” the Fox News report continued.

The restaurant has reopened, however there is still no dine in options available.

”Our store properly and clearly posted signage to communicate local vaccination requirements,” In-N-Out Burger’s Chief Legal and Business Officer, Arnie Wensinger explained in a statement sent out to Fox News. “After closing our restaurant, local regulators informed us that our restaurant Associates must actively intervene by demanding proof of vaccination and photo identification from every Customer, then act as enforcement personnel by barring entry for any Customers without the proper documentation.”

“‘We refuse to become the vaccination police for any government,’ Wensinger declared, slamming the San Francisco Department of Health’s requirements as ‘unreasonable, invasive, and unsafe’ and accusing the city of asking restaurants to ‘segregate Customers’ based on vaccine documentation,” the Fox News report continued.

“We fiercely disagree with any government dictate that forces a private company to discriminate against customers who choose to patronize their business,” the statement read. “This is clear governmental overreach and is intrusive, improper, and offensive.”

“In a statement to Fox News, the San Francisco Department of Health confirmed that the company was issued a notice of closure for the Fisherman’s Wharf location on Oct. 14 for ‘noncompliance with the Safer Return Together Health Order.’ The department added that the company was warned multiple times before the closure notice was served,” the outlet went on to say.

“Vaccines remain our best tool to fight this disease and come out of the pandemic,” the statement noted. “Vaccination is particularly important in a public indoor setting where groups of people are gathering and removing their masks, factors that make it easier for the virus to spread. That is why San Francisco requires proof of vaccination for indoor dining. ”

A public health order for the city and county of San Francisco states:

Also, this Order includes proof of vaccination requirements for patrons to use certain indoor facilities, such as restaurants, bars, clubs, and gyms, as well as for people attending large and mega indoor events. This Order includes recommendations to reduce COVID-19 risk, but not requirements, for individuals, businesses, and government entities.

A section of the order dating back to August stated:

As soon as possible, but no later than August 20, 2021, Covered Businesses must require all patrons age 12 and older to show proof that they are Fully Vaccinated before entering any indoor portion of a facility, subject only to the exceptions below and any applicable requirements of federal, state, or local laws requiring accommodation.

The order also says, “Dining establishments and bars that serve food may allow individuals wearing a Well-Fitted Mask to enter the indoor portion of the facility to order, pick up, or pay for food or drink ‘to go’ without showing proof of Full Vaccination.”

The left continues to try and push this country with more and more ridiculous mandates and fear mongering to try and justify the massive power grabs they keep trying to make.

However, what they are really doing is waking up Americans who have fallen into a sense of political apathy. The more of these individuals who wake up and resist this nonsense, the more certain a victory for liberty becomes.