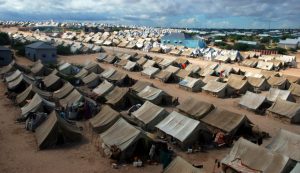 The county of San Diego is now trying to build a migrant tent city on farmland that is individually owned to help providing housing for “immigrants coming across the border.”

This is in addition to a mini-city that was built inside the San Diego Convention Center just last month, which currently houses somewhere around 1,450 migrant children who enter the United States through the Texas border.

On Tuesday of this week, the county also created a $5 million fund to help provide illegal immigrants with free legal services to help them fight against being deported.

At this point it isn’t clear where the population for this tent city would come from because President Joe Biden has stated that the border in California is closed.

The San Diego County Department of Agriculture, Weights, and Measures sent an email solicitation on Wednesday to approximately 100 ranchers and farmers asking for volunteers to rent their land on a long-term basis. The proposal would include providing “wrap-around” services, presumably similar to what the convention center provides, on-site meals, and medical, educational, and recreational services.

The email was made public by Reform California, a populist PAC that has a successful history of recalling far-left politicians and lobbying for limited government. Founder Carl DeMaio said he was contacted by three ranchers who received the email and were furious that the county would hatch such a plan and try to enlist them in their scheme, he said.

“It’s a can of worms. They don’t want a huge tent city on their land,” DeMaio said. “The concern I have is that they will probably get someone who is greedy and will sell out. It will have all kinds of impact: a den of illegal activity, public health problems, and an environmental health hazard.”

The email says in part:

“To Our Valued Customers:

“The Calif. Department of Food & Agriculture is working with California Office of Emergency Services on finding and renting/leasing on a long-term basis any private, fallowed ag land to build a tent city in the county for the immigrants coming across the border. The State plans to provide wrap-around services as well.

Jim Desmond, a Republican, serves as the County Supervisor, and stated he was stunned by the plan.

“I am working with county staff to make sure this DOES NOT become a reality,” he commented in a statement. “While the federal government needs a solution to the immigrants coming across the border, putting tent cities on agriculture land is not the solution.”

Agricultural land is not properly zoned as high-density housing, but DeMaio speculates that’s not going to stop Democrats from attempting to jam through whatever fixes are necessary with their 3-2 majority.

“They will change it from agricultural to shantytown,” DeMaio stated. “We are trying to stop it with public pressure, but there may have to be a lawsuit filed. The problem is the courts are so slow to act, and it could be up and running in no time.”