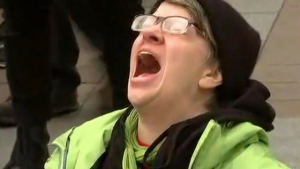 This, right here, ladies and gentleman, is exactly why we can’t get anything done in this country.

We thought the divisiveness was bad in 2016, but boy, have progressives gotten bitter over the last 500 or so days.

A writer over at Salon is suggesting that, to best combat Trump’s reign of terror, liberals literally shun their family members who voted for The Donald.

Nevermind that it’s been over a year and a half since the election and if someone voted for Trump, there is not much anyone can do about that now because he’s President. Nevermind that, by their own ideals, leftist believe in inclusion, tolerance, hearing each other.

No, anything goes in the name of #Resistance and that means cutting off blood relatives.

Let me just say, if you trust a writer over at Salon more than your own family, regardless of their voting record…your relatives might be the ones who should consider cutting you off. Just saying.

If you have friends or relatives who support Donald Trump you should confront them. Explain to them that they are complicit with Trump’s cruelty and sadism. Then communicate that you will no longer speak with them, nor will you offer them emotional, financial or other types of support until they denounce Donald Trump and what he represents — and make amends through speech and action.

This will not be easy. Doing what is right rarely is. But it is necessary.

Some will protest, saying that you can’t know what is in a person’s heart based on who they vote for. This is untrue. Voting and other types of political behavior are in many ways actions which are based more on emotion than they are reason. As such, a vote for Trump and continued support for him is a clear signal to a person’s deep and sincerely held values and beliefs.

The line “voting and other types of political behavior are in many ways actions which are based more on emotion than they are reason” jumps out at me.

Actually, this author gives no solid reasoning why it would be remotely productive to cut off family members, but that actually doesn’t matter. Because, you see, to her audience, being loud, aggressive, and obnoxious with one’s beliefs is the equivalent to productivity. And who can blame them? The politeness that many Americans try to express to their friends, family members, and acquaintances has inconveniently allowed a very toxic politically correct dogma to creep so far into our cultural Zeitgeist that an entire generation has gotten swept up in the allure of victim culture and activist glamour.

What better way to continue to wage armchair revolutions than to just be a total jerk next Thanksgiving, right?