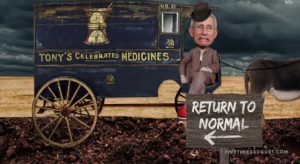 Video sharing platform YouTube has demonetized a song critical of Dr. Anthony Fauci which alleges that the current director of the National Institute of Allergy and Infectious Diseases told some big, fat fibs about the coronavirus pandemic.

The song, “Sad Little Man” by Five Times August says that the doctor, who is, according to the lyrics, “dead in his soul,” deceived the U.S. in order to get public attention.

“Sad little man sitting deep in a lie
He’s dead in his soul but he’ll keep you alive
Do what he says, not what he do
‘Cause the truth is for him and the lie is for you,” the first verse of the song says.

Portrayed as a snake oil salesman and charlatan and adorned in clown shoes and a crown, the song rips Fauci for his supposed relentless flip-flopping and downplaying of science, framing him as a man who has tricked the public into worshiping him like a god.

Searched the link you gave for the term "medical misinformation" and nothing came up. Who is on the "team" anyway? How many are on the team? Can I speak with them personally? What are their medical credentials? Are they experts in the field of medicine? I have questions. https://t.co/tSrQEXn1rt

“Sad little man gonna trap you like a dog
Put your head in a net while they eat you raw
Don’t ask why, just comply
‘Cause fear is the drug that the doc prescribed,” the third verse says.

Despite never mentioning the coronavirus by name, the video was demonetized by YouTube for “containing medical misinformation,” Five Times August tweeted.

“Sorry for any confusion — the video is ineligible for full monetization due to the content (which includes metadata) containing Medical Misinformation,” @TeamYoutube posted in a tweet. “Medical Misinfo is a policy that’s part of Dangerous and Harmful acts. Hope this helps clarify!”

We appreciate your patience — our team confirmed that your video is ineligible for full monetization due to violating our policies on Medical Misinformation. More info here: https://t.co/1QaeHtxQmy

However, apparently, this time was a bit different and “Sad Little Man” was completely removed before it was reinstated, Skistimas remarked.

“Just as the video was reaching peak traffic I started receiving user comments about how difficult the video was to find and that it was not appearing in search results,” the singer claimed.

“It wasn’t until I called YouTube out publicly on Twitter did the original upload magically appear back in search results but Google/YouTube never explained or gave reason to any of this and who knows how many views and potential subscribers I lost due to this,” he went on to say.