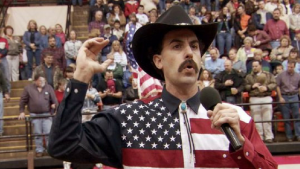 The bad stereotypes many on the left have of conservatives and Trump supporters is already cringe-worthy, but coming from someone who’s not even American, it’s downright embarrassing.

Earlier this week, Sarah Palin wrote a scathing Facebook post about the way in which Sacha Baron Cohen, the British comedian who conducts interviews with clueless subjects as one of his many outrageous stereotyped characters, disguised himself as a wounded veteran to dupe Palin into an interview.

“What I was led to believe would be a thoughtful discussion with someone who had served in uniform,” she wrote, turned out to be “a long ‘interview’ full of Hollywoodism’s disrespect and sarcasm – but finally had enough and literally, physically removed my mic and walked out, much to Cohen’s chagrin. The disrespect of our US military and middle-class Americans via Cohen’s foreign commentaries under the guise of interview questions was perverse.”

“I did NOT say I was a War Vet. I was in the service — not military, but United Parcel,” he wrote on Twitter under an account created for the character. “And I only fought for my country once — when I shot a Mexican who came onto my property.” He went on to thank Palin for “TELLING THE TRUTH about Obama’s birth certificate and the location of Russia.”

The comments are full of delighted leftists who claim they can’t stop laughing, although it seems to be based on little more than their hatred for the right.

Labeling people on the right as stupid, or parodying them as such, has been done to death, and in my humble opinion, this little bit seems to just reek of a bad impersonation of an American from a Brit.

Just as Palin claimed Cohen’s Hollywood politics bled through his heavy disguise in their interview, his contempt for people he knows little about bleeds through in this mocking publicity stunt.

Good comedy always has some good truth in it and if your starting point is one that’s mostly ignorant of American culture and why someone is a conservative in the first place, it’s probably going to fall flat.

And for the love of all that is funny, Hollywood, why don’t y’all try something original for once?