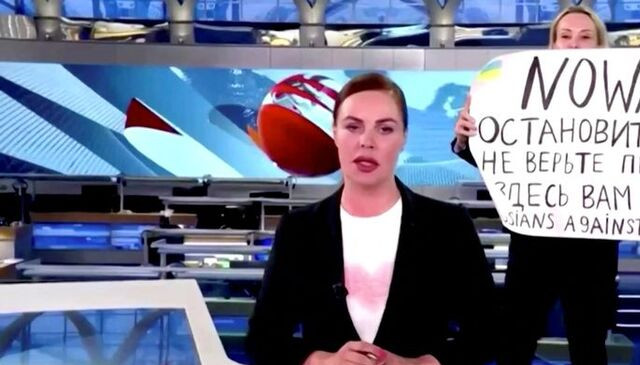 If you want to know what a true totalitarian state looks like, just take a look at what Russia did to a woman who decided to boldly hold an anti-war protest on state run television.

Folks, if you don’t think what happened in this situation could happen here, you haven’t been paying attention for the last two years during the pandemic.

According to Newsmax, “A Russian court fined a woman 30,000 rubles ($280) Tuesday after finding her guilty of flouting protest legislation when she interrupted a live news bulletin on state TV and denounced the war in Ukraine, the RIA news agency reported.”

“Marina Ovsyannikova, a Channel One employee, held up a sign behind a studio presenter reading the news on Channel One Monday night and shouted slogans condemning Russia’s Feb. 24 invasion of Ukraine,” the report concluded.

This is precisely what the left in our country has been trying to do, though more subtly, in censoring opinions on the coronavirus and the controversial vaccines that have come out of it.

Big government liberals desperately want to snuff out anyone who has an opinion that differs from the status quo narrative they push through their propaganda machines in the media.

That’s what cancel culture is all about.