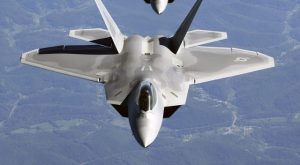 Remember way back when Mitt Romney was taking on Barack Obama for the presidency back in 2012 and stated that Russia was a big threat for America and people laughed at him?

Well, over the last several years we’ve seen an increase in tension with the country here and there, which seems to validate Romney’s point. Today is one of those here and theres.

Apparently, a Russian aircraft intercepted a U.S. military plane three different times over the Mediterranean using a very dangerous high-speed pass that put the lives of the American crew at risk.

More from The Washington Times:

The Navy’s 6th Fleet said the Russian SU-35 intercepted the U.S. P-8A Poseidon in international airspace over the Mediterranean Sea.

“The second interaction was determined to be unsafe due to the SU-35 conducting a high speed pass directly in front of the mission aircraft, which put our pilots and crew at risk. The crew of the P-8A reported wake turbulence following the second interaction,” the 6th Fleet said in a statement condemning the incident. “While the Russian aircraft was operating in international airspace, this interaction was irresponsible. … Unsafe actions‎ increase the risk of miscalculation and potential for midair collisions.”

The statement added that the U.S. aircraft was “operating consistent with international law and did not provoke this Russian activity.”

This incident comes after the U.S. intercepted a Russian aircraft that was flying off the coast of Alaska, which of course, just goes to show you that despite the media’s best attempts to paint President Trump as Russian President Vladimir Putin’s BFF, things are not peachy keen between the two nations.

Russia has been a thorn in the side of our country for a long, long time, and to be honest, it doesn’t look like that’s likely to change. Our relationship with them is very complex and complicated, with lots of drama playing out between the two.

The Russian fighter ended up returning to base once the U.S. aircraft changed trajectory away from the airspace of Hmeymim air base in Syria.

This is definitely a situation brewing that needs to have an eye kept on it.