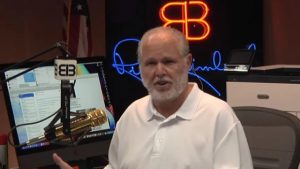 Legendary conservative radio host Rush Limbaugh, the man who was a thorn in the flesh for several Democratic presidents and managed to build an audience of millions of loyal listeners, has passed away after a long battle with lung cancer.

The radio host died Wednesday morning at his home located in Palm Beach, Florida, according to Kathryn Adams Limbaugh, his wife, who made the announcement on his radio program.

Limbaugh, whose flair for showmanship and self-promotion led him to dub his five-days-a-week, three-hour radio program the “Excellence in Broadcasting” network, was one of the most influential conservative voices of the 1990s and for the first two decades of the 21st century.

Limbaugh was presented with the Presidential Medal of Freedom by then-President Donald Trump during the 2020 State of the Union address, days after he publicly announced his diagnosis.

From his role in the 1994 “Gingrich Revolution,” in which he was made an honorary member of the class of elected House Republicans, to his promotion of the Tea Party and his embrace of Trump, Limbaugh was one of the premier voices of the conservative movement, a figure who shaped political movements and generated tremendous controversy by reaching millions of listeners for hours each day.

Limbaugh’s radio program first reached national syndication back in 1988 in New York City where his show became the highest rated radio program in the United States. The program had a monthly audience of 25 million listeners and was broadcasted on more than 650 radio stations in 2018.

Rush was a powerful voice in conservative media and helped pave the way for the amazing people we now have in the movement today.

Prayers for his wife and family in this time of loss.