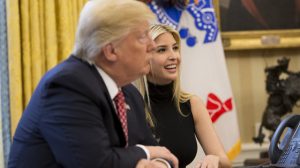 Totally unfunny actress and comedian Rosie O’Donnell recently said something totally disgusting and absolutely disrespectful about President Trump’s relationship with his daughter Ivanka, stating it has a “creepy incest feel.”

Oh, but she didn’t stop there. No, she went on to allege that he had “been doing bad things with her for a very long time.”

O’Donnell really is a sad excuse for a human being.

O’Donnell’s comments came when she appeared on the left-wing “Michelangelo Signorile Show” on SiriusXM, and the host asked her about Ivanka Trump joining her father at the G20 Summit in Japan — as well as the president’s prediction that Ivanka would one day become America’s first female president.

“Talk a little bit about Ivanka Trump and what Donald Trump is doing with her,” Signorile said.

“I don’t know what he’s doing with her …” O’Donnell continued.

“I mean, politically,” Signorile said with a laugh.

“I think he’s been doing bad things with her for a very long time,” O’Donnell said.

“There’s a creepy incest feel that is very prevalent amongst Donald Trump and his children, at least his daughter. Very creepy. I don’t know. I think she’s like, you know, a talentless, non-intelligent, non-powerful woman,” the former co-host of “The View” said.

Who wouldn’t want to have O’Donnell as a role model? You’ll never find a better, shining example of the kind of good humanity is capable.

Okay. Done with the sarcasm now.

This sort of comment is beyond deplorable and Rosie ought to be ashamed of herself, but that would imply that she has a conscience, which, of course, she doesn’t. Or at least it’s a pretty crappy one if she does.