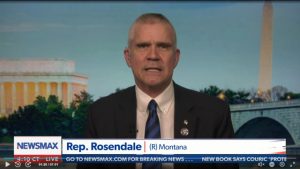 Rep. Matt Rosendale, a Republican from Montana, recently told Newsmax that empty shelves all over the nation due to the supply chain shortage is making the United States look a whole lot like China.

”If you would watch the newsreels now, you would think that you were watching something out of Russia from about 20 or 30 years ago, with bare shelves and supply chains being shut down,” Rosendale stated during an appearance Wednesday on ”The Chris Salcedo Show.”

”The administration is already warning people that if they want to have presents under the Christmas tree this year, they need to start ordering them now. The problem is, you can’t get them, and if you can, they’re probably about 30-50% more expensive than they were this exact time last year,” Rosendale continued.

As hundreds of cargo ships continue circling U.S. ports looking for a slip to dock and unload, an estimated $106,400,000,000 in freight remains in limbo, according to Forbes.

The bottleneck is being exacerbated by a shortage of labor to work at the docks and on trains and trucks to transport the merchandise and supplies to warehouses and eventually stores, resulting in empty shelves at retail outlets throughout the country.

President Joe Biden said Wednesday that he is working with the ports and businesses to get them running 24 hours a day, seven days a week, to get the supply chain moving faster ahead of the holiday season.

During a speech that was given at the White House, President Joe Biden stated that the Port of Los Angeles would be a 24/7 operation in order to get more of the ships unloaded and get more products moving through the system at a faster pace.

”This is the first key step in moving our freight transportation and logistical supply chain nationwide to a 24/7 system,” Biden went on to say in the speech. ”Traditionally, our ports have only been open during the week, Monday-Friday, and are generally closed down at nights and on weekends.”

”By staying open seven days a week, through the night, and on the weekends, the Port of Los Angeles will be open 60 more hours a week,” he added.

The president then said that port and the Port of Long Beach receive a total of 40 percent of all the incoming cargo for the entire nation.

He then went on to ask “major retailers and freight movers” to “step up” also and address this situation.

Rosendale then said that there’s an even bigger problem for the U.S. on the horizon due to all the money that’s been pumped into the system over the course of the pandemic, which is going to make inflation go up.

”This artificial stimulus that they have continued to pump into the economy is driving inflation up,” he said in conclusion. ”Whether we’re talking about bread, milk, eggs, the price of crude oil has doubled since this time last year. There’s a major problem with inflation, and we know that it goes back to this artificial stimulus being put in.”