Roseanne’s Show to Continue on Without Her, Studio Rumored to Kill Her Off 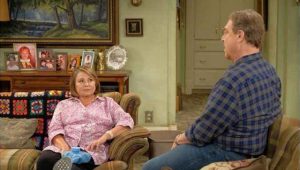 It looks the cast of Roseanne received some good news this week as the star of the series, Roseanne Barr, has allowed the series to continue on without her, reaching a settlement with ABC to do a spinoff called “The Connors.”

The show was revived earlier this year to both critical and fan acclaim, and was even renewed for a second season until a controversial Twitter post from Barr concerning Valerie Jarrett ended with her being fired.

Originally, ABC simply cancelled Roseanne’s reboot after Barr tweeted out a racial slur against former Obama official Valerie Jarrett. Now, they’re keeping all the cast members of the reboot, but killing Roseanne off.

According to the network:

After a sudden turn of events, the Conners are forced to face the daily struggles of life in Lanford in a way they never have before. This iconic family — Dan, Jackie, Darlene, Becky and D.J. — grapples with parenthood, dating, an unexpected pregnancy, financial pressures, aging and in-laws in working-class America. Through it all, the fights, the coupon cutting, the hand-me-downs, the breakdowns — with love, humor and perseverance, the family prevails.

The hot rumor is that Roseanne will die of an opioid overdose, since in a recent episode, it turns out she was hiding oxycontin in her refrigerator. It would be far more appropriate for Roseanne to be shot by President Trump on Fifth Avenue.

This show is almost certain to fail, especially considering the fact that the vast majority of Roseanne’s new viewership were conservative Trump supporters who were none too happy with ABC for giving her the boot to begin with.

There is some clear cut hypocrisy in Hollywood as folks like Samantha Bee and Peter Fonda can use sickening comments — like Fonda’s call for young Barron Trump to be put in a cage with pedophiles — without any repercussions whatsoever. Fonda’s movie should be shelved if the left cares at all about consistency.

It’ll be interesting to see how the ratings are impacted by Roseanne’s absence.