Roseanne vs. Peter Fonda: This Is Beyond Double-Standard 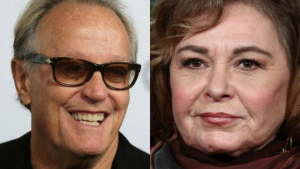 How do you accurately portray in words how insane this is?

If you somehow have the great privilege of not having been aware of the firestorm of outrage that resulted, just know you are very, very blessed.

Within 24 hours, Barr, who had been enjoying wildly successful ratings of her sitcom reboot, lost her show and proceeded to be the object of hysterical snowflake meltage and sickeningly self-righteous criticism for the rest of the week’s news cycle, that fateful final week of May 2018, which is sure to go down in the annals of faux outrage.

Fast forward a few weeks to Peter Fonda, the little brother of Jane “Hanoi” Fonda, who literally called for Trump’s small children to be handed over to pedophiles and for DHS Kirstjen Nielsen to be whipped naked in the streets.

But has he dominated the news cycle?

No. The Democrats and news media, but I repeat myself, are too busy being entirely too transparent about their blatant lack of compassion for immigrant children being separated from their parents once Republicans move to actually end these practices to care about a little old call for child rape.

Fonda has now deleted his abhorrent tweets, which can be viewed below:

Fonda got the Secret Service called on him by what had to be an incredibly upset Melania Trump, but he has not, so far, lost any job. In fact, Sony still plans to release a movie he stars in this weekend.

You can call this a double-standard, but it’s far beyond that. A double-standard would be if Fonda had made a racist or incredibly uncouth joke about a member of the President’s administration and didn’t lose his job while Roseanne did.

Peter Fonda is actually calling for an uprising of “90 million” people to subject members of the Trump administration and his 11-year-old son to unthinkably heinous violent acts, while the only repercussions he’s had to face so far were most likely a few angry calls from the people who wrote his apology for him.

Meanwhile, Melania Trump, the wife of the man on whom has been pinned the heartbreaking situation at the border, is down there meeting with the families with Fonda is hanging out in Hollywood getting ready for his movie premiere, it seriously needs to be noted.

This week has been a particularly transparent week for the leftist zeitgeist. All this irrational outrage about children being separated from their parents on the border, while they do nothing more than hurling dramatic insults and cry crocodile tears on camera while their politicians do absolutely nothing to truly help these families.