Robert De Niro Is Fighting Trump, One Upscale Sushi Restaurant At a Time… 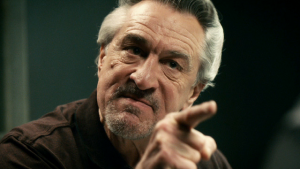 While the rest of the world cowers under the crushing, tyrannical reign of a democratically elected president who sometimes says mean things, De Niro, almost as if he is the hardened tough guy he so often pretends to be in movies, is taking a huge step to retrieve our republic from the clutches of evil, evil Donald Trump.

Like brave freedom fighters before him who defiantly resisted cruel dictators against all odds, De Niro doesn’t care what the repercussions of his actions are, he has one sole aim: to stop Trump.

It began with insults. The most powerful weapon of a free people, of course. The more profanity, the more liberty.

“He’s a punk, he’s a dog, he’s a pig, he’s a con, a bulls— artist, a mutt who doesn’t know what he’s talking about, doesn’t do his homework, doesn’t care, thinks he’s gaming society, doesn’t pay his taxes,” he said in 2016, an era in which the media didn’t dare speak an ill word of then-candidate Trump, clearly fearing backlash if he ended up being elected.

Since 2016, he’s valiantly made several more profanity-laced tirades against Trump, the more nonsensical, the more effective at stopping the Trump Reign of Terror. It is said that every time De Niro utters the words “f***ing Trump”, another step is made in the impeachment process.

Now, De Niro has made his most stunning, most courageous, most brilliantly defiant move yet…he’s banned Trump from his swanky Peruvian-Japanese fusion restaurant.

If Gandhi were alive today, he’d be learning at De Niro’s knee.

De Niro told the Daily Mail that “never let Trump into any of the Nobu restaurants,” adding “I don’t care what he likes. If he walked into a restaurant I was in – I’d walk out.”

Nobu is the restaurant chain that De Niro founded in 1993 with the sushi chef Nobu Matsuhisa and now boasts 30 locations around the world, according to Zero Hedge.

Matsuhisa, however, is clearly a traitor to De Niro’s cause, saying that “It’s my dream for Trump to sit next to Bob. To make them sushi!”

Clearly, Matsuhisa does not have the stomach for De Niro’s revolutionary verbal warfare on our tyrannical ruler, which include such statements as “This f***ing idiot is the President. It’s The Emperor’s New Clothes – the guy is a f***ing fool,” and:

“Our government today, with the propping [up] of our baby-in-chief – the jerkoff-in-chief I call him – has put the press under siege, trying to discredit it through outrageous attacks and lies.”

Surely, this man will have victory over our evil dictator and set us all free to enjoy posh Peruvian sushi in peace once again.