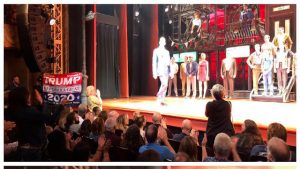 Actor Robert De Niro has really done a bang up job of making it clear how much he despises and utterly loathes President Donald Trump, taking occasions in interviews, while delivering speeches to high school kids, and spewing vulgarities during award shows.

De Niro has even gone so far as to state he’d like to punch the president in the face. Gee, such a nice guy, right?

Perhaps he’s confusing reality with fiction, believing himself to be a rough and tumble gangster type like Vito Corleone?

Anyway, De Niro recently got a taste of his own medicine, as a Trump supporter crashed a showing of his new Broadway musical, “A Bronx Tale.”

According to witnesses, at the end of the performance during the curtain call, the Trump supporter, sitting near the stage, whipped out his “Keep America Great: Trump 2020” banner to make an obvious political statement.

One audience member said he was disappointed with the Trump supporter’s choice of protest venue.

“The times we live in. At the end of A Bronx Tale, a man turned around and faced the audience to show us how big of a pair he has. He was escorted shortly after. It’s sad that people can’t enjoy a beautiful show and embrace its unifying message without politicizing it,” Joe Del Vicario wrote on Twitter.

Meanwhile, Brian Strumwasser, a hair dresser who worked on the show, lambasted the protester’s as “low life scum bag.”

“Whoever the low life scum bag who thinks it’s ok to post their political views at a Broadway show and disrespect everyone there who paid to watch a show that is ALL ABOUT INCLUSION was thankfully removed from the theater Saturday night,” Strumwasser wrote on Instagram, according to the New York Post.

Look, it’s highly unlikely this would’ve happened had De Niro just cooled it a bit. We all know he hates Trump and he’s absolutely entitled to his opinion on the man and his political policies. However, being allowed by law to express your views doesn’t mean people won’t oppose your message and choose to broadcast their counterpoint to the masses.

If De Niro is really a “tough guy,” then he’ll learn to not take things so personally and embrace the fact there are folks who see the world differently than he does.