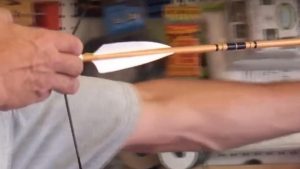 A pair of intruders broke into a man’s home in Pennsylvania and immediately realized just how bad of an idea their caper really was.

The homeowner reached for the nearest weapon to him, pulled it up, and shot at the two robbers. However, he didn’t use a pistol or a shotgun. It was a bow and arrow.

Yes, this guy chased off some bad guys like some sort of real world version of Hawkeye from the Avengers. So awesome.

“He heard them come in through his back door, which was unlocked,” Lt. Sean Frank of the Shaler Police Department told WPXI-TV. “He grabbed his bow and arrow, which he’s proficient with, and he says he fired three shots down the hallway. Doesn’t think he struck them at that point.”

But the station reported that the homeowner managed one more shot as the pair fled his house which he believed hit one of them in the arm.

This man is simply too cool for school. It’s one thing to be proficient with a firearm, which is amazing of course, but to be this good with a bow and arrow is just way, way awesome.

A firearm is still a much better weapon for self-defense, but hey, whatever works and keeps people safe is always a good thing.

It seems bad guys in our day and age simply don’t understand how much of a risk it is to come into a stranger’s home. Thanks to anti-gun nuts and the anti-gun sentiments floating around everywhere, they’ve become comfortable with the assumption that most people don’t have weapons to defend their property with.

This is exactly why the Second Amendment exists, and why so many people own guns. Unfortunately, liberals don’t seem to get that.