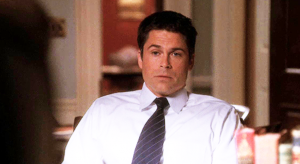 Identity politics is a fascinating thing.

See, if you’re a purveyor of identity politics, like one Elizabeth Warren, you’ll milk your alleged Native American ancestry for all its worth.

Then, when you’re busted for not actually being Native American, and you get mocked for it, you get to call your critics “racist.”

Rob Lowe recently took a jab at Warren, who, now that she’s running for president, is being haunted more than ever by the whole fake-Indian thing.

ICYMI here's that @RobLowe tweet that has since been deleted … pic.twitter.com/LXAGxouu7Z

Not if you’re a snowflake.

He took down the tweet, but followed it up by instead mocking the people who got so offended in the first place.

I deleted my Elizabeth Warren tweet. It was a joke and some peeps got upset, and that’s never my intention. On the GOOD side: I just got to use the Oxford comma!

Observation: many polarizing politicians actually LIKE each other, privately help each other, then publicly stir the pot, playing for votes. That’s fine. Only thing wrong with it is when we buy it whole cloth, breeding intolerance, anger and total inability to laugh at ANYTHING.

This second observation couldn’t be more spot-on. There was a time when all politicians were open game for mockery, but now, it has become fashionable to be so perpetually offended that we have lost one of the few things that could be uniting us in a really divided time: humor.

We shouldn’t apologize for offended people with humor, we should leave it out on full display until the meltage of snowflakes is so unremarkable we stop paying attention to it entirely.