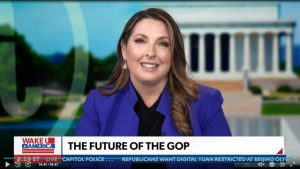 Republican National Committee Chairwoman Ronna McDaniel recently sat down for an interview on Newsmax where she claimed that the left in America is telling an “absolute lie” and downplaying the “real horror of racism” with claims that voter laws that have already been passed or are currently under discussion in several different states are basically new Jim Crow rules.

“They don’t want to talk about the fact that most Americans support voter ID,” said McDaniel during her appearance on Newsmax’s “Wake Up America.” “They support bipartisan poll watchers. They support security for dropboxes. They support video surveillance so that we can ensure that the elections are being monitored … we also want to make it easier to vote and harder to cheat, and that’s what all these laws are about.”

Republicans, she went on to add, “want to make sure that everyone who legally can vote, can, but that people who can’t, shouldn’t. That makes us feel safe in our elections and feel surety in the outcomes, and that’s important to every American.”

McDaniel also slammed the media for its reporting about Democrat lawmakers who left Texas rather than allow a quorum to vote on that state’s proposed voter laws, saying the “hypocrisy is clear” for its treatment of them after six have been reported as being positive for COVID-19.

“If these were Republican lawmakers skipping town on the taxpayer dime, not wearing masks on a plane, meeting the vice president, getting COVID, this would be all over the news,” McDaniel went on to say. “Republicans (would be) be eviscerated but when it’s Democrats, it’s a different standard. And that’s what’s so hypocritical about the way we process news right now in this country, and this is why so many Americans have so much distrust.”

She also agreed that come 2022, Americans will show that they are “done” with Democrats as the majority party.

“I mean, they are watching the censorship (and) the cancel culture,” the RNC chairwoman said. “They’re watching big tech in collusion with the Biden administration suppressing free speech, but beyond that are gas prices are up. We’re seeing inflation. We are seeing our groceries costing more. We are seeing the disaster of our border not being secure. Abandoning Israel, uh, vacating our energy independence. These are so many things that are coming out of this administration in such a short time to dismantle what the Trump administration did so well that lifted every American, so we’re looking forward to a great midterm to discuss these ideas.”

It’s really not shocking to see the extreme leftists in our country trying to use race as a means of preventing bills from passing that actually preserve the integrity of our election system. This is the strategy they employ to try and undermine everything the Republican Party tries to do.

Because of that, the term “racist” has lost a lot of its meaning and sting, which is not at all a good thing. Let’s hope they wake up to the damage they are doing to our nation and culture.