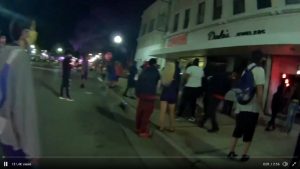 Violent riots and looting erupted in the city of Kenosha, Wisconsin late Sunday night after a black man was shot by cops during a responses to a call concerning a domestic incident.

Drew Hernandez, a journalist, posted up numerous videos of the chaos taking over the streets of Kenosha, pointing out that most of the perpetrators of the violence were members of Black Lives Matter.

BLM rioters not holding back by vandalizing and looting local businesses here in Wisconsin pic.twitter.com/wzfWq9OlUU

BLM has begun vandalizing and looting in Wisconsin

BLM has begun vandalizing and looting in Wisconsin

Democratic Wisconsin Gov. Tony Evers immediately moved to criticize law enforcement officials late on Sunday night after Jacob Blake was shot on Sunday afternoon by police who were responding to a domestic incident. Evers’s criticism of the police came even as he stated that officials did not have all the details from the incident.

Tonight, Jacob Blake was shot in the back multiple times, in broad daylight, in Kenosha, Wisconsin. Kathy and I join his family, friends, and neighbors in hoping earnestly that he will not succumb to his injuries. While we do not have all of the details yet, what we know for certain is that he is not the first Black man or person to have been shot or injured or mercilessly killed at the hands of individuals in law enforcement in our state or our country.

And we stand against excessive use of force and immediate escalation when engaging with Black Wisconsinites. I have said all along that although we must offer our empathy, equally important is our action. In the coming days, we will demand just that of elected officials in our state who have failed to recognize the racism in our state and our country for far too long.

Video of the incident that went viral online appeared to show that something happened while law enforcement was engaging with Blake as they all drew their weapons on him at the same time.

Now, before anyone thinks this is yet another story of law enforcement officers using excessive force on an innocent man, there are a few things you need to know about Blake.

He apparently had a warrant out for his arrest and boy, oh boy, were the charges against him bad. There were several for sexual assault and domestic abuse, as well as a trespassing charge.

The guy is hardly what you’d call “innocent.” He has a track record of violence and that has to be taken into consideration when you look at the actions taken by the police in this incident.

As of this writing, Blake is still alive and in serious condition.