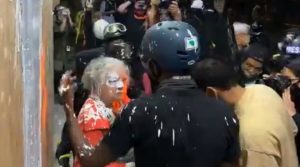 If you aren’t already convinced that Antifa and like-minded individuals who are participating in “peaceful protests” are terrorists, you might want to reconsider that position after you see what they did to a couple of elderly women who were out trying to prevent them from destroying their Portland suburb.

This is the second night in a row that this neighborhood was under siege. The first time these folks showed up, they tried to burn down the police precinct and assaulted police officers with rocks and other dangerous materials.

Makes you wonder what it is going to take to get the Democrats in charge to take action and restore order.

The Portland Police Department tweeted out a photo of the elderly woman whom the rioters doused with paint and noted in a subsequent tweet that they incorrectly stated that she was the woman using a walker, when in fact it was another elderly woman who was present.

This unknown woman using a walker was confronted by the group currently outside East Precinct and paint was strewn all over her. pic.twitter.com/k1cCVMbNht

Portland Tribune reporter Zane Sparling took videos of the incident that showed the rioters aggressively confronting the two women and showed the woman covered in paint.

Counter protesters in standoff with Portland protesters; she was doused in paint I believe pic.twitter.com/08ceieWh3t

Journalist Andy Ngo further highlighted the hostile actions towards the two women, writing, “An older woman tried to stop #antifa rioters from continuing their attack on the Portland Police east precinct tonight. She stood in the front and they dumped some white liquid all over her & curse her out.”

An older woman tried to stop #antifa rioters from continuing their attack on the Portland Police east precinct tonight. She stood in the front and they dumped some white liquid all over her & curse her out. #PortlandRiots https://t.co/fYEu08DOfJ

Antifa militant stops an elderly woman from putting out a fire they started at the Portland Police east precinct. #PortlandRiots pic.twitter.com/RBGb5cNu3g

Again, the question that needs to be asked is how much more is it going to take for something to be done and law and order restored to the streets of Portland and its surrounding communities.

This is a truly shameful display and the miscreants involved in this need to be tossed behind bars and given a hard dose of reality.

Not to do anything at all is tantamount to support for these tactics.