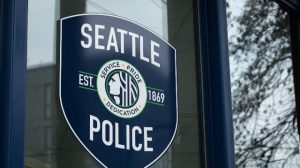 The anti-cop protests in Seattle are continuing to rage on, months after the death of George Floyd at the hands of Minneapolis police officers, growing in their intensity and level of violence.

A “peaceful protest” as the left calls them, quickly turned into a riot on Sunday in the city of Seattle. Demonstrators set off a “large explosion” close to a police car that injured several law enforcement officers and sent them to the hospital.

But these are “peaceful protests” people. Don’t forget that.

“The protest began in the Seattle neighborhood of SoDo around 7 p.m., with an estimated 100 people marching on foot with cars following behind them, according to a Monday morning press release by the Seattle Police Department,” Fox News reported Monday. “They made their way to the building that houses the Seattle Police Officer Guild and, within hours, the demonstration turned violent.”

Although the protests in Seattle have been routinely destructive, Sunday’s saw the use of a large incendiary device, apparently designed to injure police officers and inflict maximum damage.

“Multiple explosives were thrown toward officers,” Seattle’s police department said in a statement. “Several officers were struck by explosives and injured.”

Some photos of the incident were obtained by Fox News and show one of the officers with lacerations on his neck and below his eye, plus a fairly large bruise just beneath his eye socket. Another officer suffered burns on the back of his neck.

It doesn’t appear that any of the injuries are life-threatening.

This is awful. Just plain awful.

What’s worse is these people will not be held accountable for their actions. Liberal leadership in Seattle will continue to ignore the situation instead of taking action to bring law and order back to their city streets.

These are not peaceful protests. They’re violent riots. There’s no ifs, ands, or buts about it. Plain and simple, these folks are violent criminals. Antifa, BLM, they are becoming more and more like terrorist organizations by the day.

How much more of this is going to be tolerated by the American people before we demand action to quell the chaos?