Rioters In Portland Suburb Launch Assault On Police Station And Try To Burn It Down; Attempt To Run Over Police With Truck 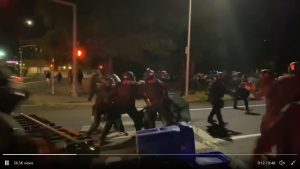 Rioters, oops, I mean “peaceful protesters,” launched a brutal assault on the Portland Police Department’s East Precinct Wednesday night, which is located in a residential area, and also tried to run police officers over in a truck while they attempted to flee the scene.

But remember, y’all. If you’re against these protesters, you’re an awful bigot.

This is the kind of chaos that gives these people chills up their spine, knowing that they can politicize it and transform it into a weapon against Trump.

Late at night a group of a few hundred people blocked traffic, shined green lasers at police officers, attempted to tear down protective boarding on the building, and worked to disable surveillance cameras in an attempt to conceal their criminal activity.

“Several people in the group began to ram a large 2 by 4 piece of wood in to the front glass doors in an effort to shatter them,” the Portland Police Department said in a statement. “Other members of the group slammed different heavy large objects into the glass doors as well. The objects included large rocks.”

“By 9:50 p.m., those who had been destructing the East Precinct glass doors successfully cracked them, causing significant damage,” the department continued. “Since serious ongoing criminal behavior continued, a riot was declared at 9:56 p.m. At 10 p.m., the front doors of East Precinct were barricaded and a fire was started using plywood and an accelerant.”

When police officers attempted to disperse the rioters, they were pelted with projectiles and commercial grade fireworks. Again, let me say for the third time, we have to remember these are “peaceful protesters.” Insert an eye roll here.

Some of the rocks these individuals were hit with were the size of shot puts. There were two more physical assaults launched by these would-be terrorists over the next two hours.

Journalist Andy Ngo, who earlier this week gave testimony to the U.S. Senate as an expert on radical left-wing terror group Antifa, tweeted videos of the assaults that happened on the police station.

For the first time since the riots began in Portland, antifa attacked the east precinct, located far on the east side of the city. Rioters immediately began disabling security cameras around the building. #PortlandRiots pic.twitter.com/s6hoPPwAs1

And like what #antifa have done w/every building they’ve attacked, they’re now tearing off the protective barrier to the east precinct to break inside. The crowd chants “didn’t see shit” to remind everyone to comply w/remaining silent. #PortlandRiots pic.twitter.com/tL8DlYcgfi

#Antifa have started a fire on the front door of the Portland Police east precinct. They tore off the barricade and placed tinder around the fire. They’re trying to burn down the building. #PortlandRiots pic.twitter.com/2UN7o21dZy

After #antifa were dispersed by police following the attack on the East Precinct, they tried to blind a woman at her home with lasers and attacked her.

Antifa have gone into residential parts of the city after moving on from attacking federal courthouse. pic.twitter.com/mKcrgHixmC

Portland Police declared a riot after antifa began to smash the windows of the east precinct & set the front of the building on fire. Here they rush in and make some arrests after rioters tried making a street blockade. #PortlandRiots pic.twitter.com/Di6xOOKo3P

Leadership in Portland needs to stop trying to be politically correct and allow this nonsense to continue. It’s time to take hard, swift action to reestablish law and order and let these individuals know that violence and rioting will not be tolerated on the streets of Portland.

Or anywhere for that matter.

Antifa has been allowed to get away with far, far too much. This is turning into a war zone. Enough is enough. This is unnecessarily risking the lives of police officers who are trying to contain this mess.

Do something, Portland. Now.