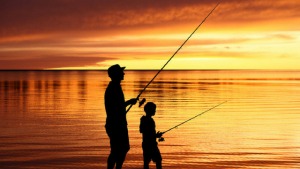 How did I know there would be a slew of reports Monday of all the leftist man-bashing on Father’s Day?

They can’t just let us have one day to enjoy barbeque, cold beer, and traditional masculinity, can they? Not one single day.

No, we must be subject to the continuous attack on the natural family unit, even though we’re just over here minding our own business, trying to just raise our kids and keep our marriages together so our children might have a future where they’re not constantly bombarded with radical leftist anti-family rhetoric that will surely bring about the widespread demise of all Western civilization.

Predictably, the issue one columnist at NBC took with Father’s Day is that age-old myth of “toxic masculinity.” Because what could be more toxic for young boys than a dedicated father who can be the kind of role models our society so clearly despeately needs, right? We should probably just continue letting single mothers struggle to raise boys alone, that’s been working our real well.

Anyway, here’s the argument from Noah Berlatsky over at NBC:

This weekend is Fathers Day, a holiday typically celebrated with displays of testosterone and gendered clichés. It’s also as good a time as any to acknowledge that there is indeed a crisis of masculinity. But it isn’t caused by feminism and changing gender norms. Rather, men experience violence and oppression because norms are not changing. And it is, in general, powerful men who enforce these unhelpful and sometimes dangerous masculine expectations, not tyrannous feminist women.

Men need more feminism in their lives, more gender equality and a relaxation of rigid and counterproductive gender norms. In other words, feminism isn’t killing men — toxic masculinity is.

I like how he just flatly asserts all this nonsense without a shred of evidence. He relies entirely on data on high male suicide rates, a male reluctance to seek out help for mental health issues as compared to women, the high rate of male incarceration, etc., to demonstrate that masculinity is “toxic.”

Today’s millennial men grew up in what author and professor Christina Hoff Sommers explains as the “manufactured girl crisis” in which educators and government organizations spent millions on initiatives to get more girls involved in STEM and to boost their confidence.

The results have been staggering: women are now more qualified, more educated, more empowered, than ever before, while boys are left in the dust.

Little boys need dads, and they need them desperately, and they need them to be masculine. It is abundantly clear that shunning masculinity and attempting to dissolve the lines between gender roles has been a massive social failure, particularly in the way it is pushed upon small children of both genders who need positive male and female role models to know how to have a healthy relationship with the opposite sex.

How can we achieve this by shunning everything masculine about fathers?