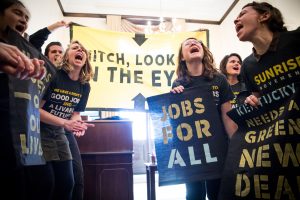 The Democratic Party has always been an ungodly mess, but now that it’s been co-opted by ultra-woke, extreme left social/economic/climate justice warriors, a moderate like Joe Biden is as close as we’ll get to any sort of reprieve.

Well, not if those assorted justice warriors have anything to say about it, anyway.

While some stalwart leftists have set their face like a flint in unflinching support of Uncle Joe even when it means excusing what we’ll call his “excessive handsiness,” others are dogpiling on the man for not being as gung-ho as they feel a good Democrat should be, especially on the subject of climate change.

“The backbone of [Biden’s] policy will likely include the United States re-joining the Paris Climate Agreement and preserving U.S. regulations on emissions and vehicle fuel efficiency that Trump has sought to undo,” Reuters reports.

This is why a “middle ground” approach to our climate crisis is unacceptable.

This isn’t like other issues where you can pretend you’re a sober adult by cutting the difference between left and right.

You’re either fighting for our future or you’re not.https://t.co/YLOVzNe2Z9

“There is no ‘middle ground’ when it comes to climate policy,” Sanders said in a statement. “If we don’t commit to fully transforming our energy system away from fossil fuels, we will doom future generations. Fighting climate change must be our priority, whether fossil fuel billionaires like it or not.”

Right, because now it’s billionaires who are the problem, not quaint little millionaires like Bernie.

AOC and Bernie’s message is clear: nothing short of the immediate passage of the Green New Deal will satisfy the increasingly vocal socialists within the Dem camp.

Although Biden’s proposals to “turbocharge” government control over various energy industries and accept the Paris Agreement’s wind and solar power mandates (and their gag-inducing price tag) certainly aren’t what I’d call moderate, they’re just not far enough off the reservation for the leftist radicals in his party.

One of Ocasio-Cortez’s political allies, Justice Democrats Executive Director Alexandra Rojas, stated that “while we’re going to support the Democratic nominee, we can’t let a so-called ‘centrist’ like Biden divide the Democratic Party and turn it into the party of ‘No, we can’t.’”

Why should a little thing like the fiscal nightmare of a $93 bajillion-dollar climate scare scheme get in the way of a brighter future? Leftists don’t need that kind of negativity in their lives.