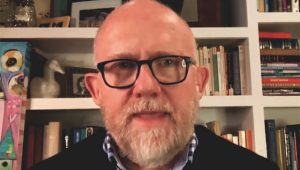 Rick Wilson, one of the founders of the anti-Trump group the Lincoln Project, has spent a lot of time in his career hanging around politicians and lawyers, so he knows well what a straw man deflection is, along with the non-denial denial, and also the art of righteous indignation.

The man pulled all of these weapons out of his arsenal on Tuesday evening in what was labeled as a his “exclusive responses” to allegations of predatory sexual behavior that have been leveled at fellow Lincoln Project co-founder John Weaver, who as of this writing is no longer affiliated with the group.

Wilson went on to issue an impassioned denial that members of the Lincoln Project had any knowledge of Weaver’s predatory behavior, specifically his reported dalliance with a minor. “I wish we could have peered into that vortex of secrets that defined [Weaver’s] life, and known he was engaged in contact with a 14-year-old boy,” Wilson said. “At no point was any member of the Lincoln Project informed about this underage child.”

Wilson proceeded to mow down a number of straw man critiques of the Lincoln Project’s involvement in the Weaver scandal while seemingly threatening the group’s critics with legal action. “The accusation that we knew about a minor child being stalked and harassed by John Weaver,” he said, was not only “categorically false” but “actionably false.”

“The folks who are accusing us of awareness of this are sick. They are, in fact, putting themselves in jeopardy. I’ll just say that as bluntly as I can,” Wilson fumed. “There will be a moment soon when the jeopardy you put yourself in by making those accusations is meaningful and tangible.”

At the same time, no serious person has alleged that Weaver’s behavior was, in Wilson’s words, a “universal constant in our organization.” Nevertheless, Wilson persisted in advising this particular straw man to “go f**k yourself.”

It seems that Wilson, who sort of reminds me a bit of a goblin, sort of, maybe, accidentally alluded to the fact that he and others in the Lincoln Project knew about these troubling allegations prior to the whole world finding out about them.

And they did nothing.

Wilson stated that Weaver’s behavior was “apparently an open secret on gay Twitter” which he said he doesn’t check “every day” because he’s a “57-year-old white dude who lives in Florida.” However, he said at no point did the allegations against Weaver ever “come to our attention in a way that said, ‘Hey, wow, this is a problem at scale.'”

So, yeah. Seems they knew about it. And again, they did nothing about it. These people are truly despicable in just about every way imaginable.