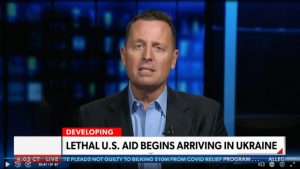 According to former ambassador to Germany, Ric Grenell, the situation that is currently unfolding in Ukraine is a “disaster” that has only “terrible and bad choices,” and then he stated that foreign leaders can “smell weakness” with President Joe Biden in office.

“All the work we did, whether it’s the border, whether it’s the Middle East, and now what we’re seeing in Europe is frustrating,” Grenell, who once served under former President Donald Trump and is currently working as a senior national security analyst for Newsmax, stated during a conversation on “The Count.”

“We don’t have any good choices. But the reality is that the leaders of Russia and China and a whole bunch of other places smell weakness,” he continued.

“We don’t have a handle on the numbers,” Grenell then stated, going on to add that the U.S. does not currently have an ambassador in Ukraine, so lower-level folks are left to coordinate with Washington.

“I can tell you from experience,” he stated. “I’d been at the State Department for 11 years. The individuals who are in charge of our embassy in Ukraine right now are not making decisions on their own. They’re going back and organizing with the assistant secretary of state for Europe, who is Karen Donfried, who used to work for the German Marshall fund where the Germans paid part of her salary. So this is a disaster situation all over.”

“We’re seeing reports that the French and the Germans are going to organize with the Russians and the Ukrainians on their own,” he continued. “This is a disaster. The Americans have said we’re going to follow the Europeans. We’re not going to have an America first policy. We’re going to have a European policy.”

Further, Germany is insisting that it wants no lethal aid to be sent to Ukraine, and is telling NATO state Estonia that it can’t supply weapons to Ukraine.

“Where is American leadership?” remarked Grenell, going on to say that Secretary of State Antony Blinken is “totally dismissed on the world stage, and so is Joe Biden.”

Grenell stated Biden has to start threatening to put sanctions on the Nord Stream II pipeline and to insist that NATO states start paying their fair share for defense, “or we’re not going to do anything.”

“You’ve got to have consequences for bad behavior and I would arm the Ukrainians and I would make it clear that we’re not happy to be in this situation and that [Vladimir] Putin is going to face severe economic consequences immediately, including on the pipeline,” he finished.