REVELATION: Was Charlottesville a complete SET-UP? 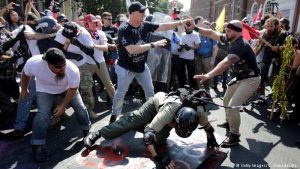 AllenBWest.com reports that at least one law enforcement officer in Charlottesville, VA has come forward to clear his conscience and reveal the truth — or at least his version of it — that what went down in the city was not only condoned by city governance but was intentional, orchestrated and may have been planned as long ago as May.

Watch the video and decide for yourself. (Warning: One instance of language in the video)

The as-yet unidentified police officer has said that the Charlottesville P.D. were specifically instructed to bring the radical left and right wing groups together to instigate violence and then to told to “stand down” once violence ensued in a deliberate effort to ignite a race riot. Hear his words:

YourNewsWire.com says – Michael Signer, the mayor of Charlottesville, ordered police to stand down during the most chaotic and destructive period of the protests – despite police protests against the orders.

“We wanted to do our job and keep the peace. But these mother******s in charge really want to destroy America.”

Fox News reporter Doug McKelway was on the scene in Charlottesville and he backs up the police officer’s claims.

“I can say, havig been in Emancipation Park from early on that morning, that what I saw with my own two eyes confirms what this law enforcement source told us. At least from all visible apearances. We saw people coming out of that park who had headwounds, who were bleeding from the head, people walking into that park with bats, with sticks — you saw what they were wearing — helmets, body armor, they had come — and this pertains to both sides — they had come to do damage.. you cannot help but notice from that video that police had been more pro-active, they could have potentially calmed this thing down to some degree.”

Michael Signer is a Virginia Democratic activist with close ties to Barack Obama and John Podesta. Before landing the Charlottesville mayor job he previously worked closely with Podesta at the Center of American Progress and worked with him again on Barack Obama’s State Department Transition Team.

The New World Order, led in the United States by elite operatives Obama, Podesta, Soros, Clinton and company, are pulling out all the stops to create division through chaos and destruction. Crowds of paid protestors and useful psychopaths are being sent into pitched battle against one another to sour the mood of the nation and further divide us all.

They are manipulating and controlling newsworthy events in order to maintain power and control over the public, and to swing public opinion.

The man accused of being a neo-Nazi and murdering a woman by deliberately driving into her during protests in Charlottesville is in reality a supporter of Hillary Clinton and member of Antifa in receipt of funding by George Soros.

White supremacist and ‘Unite the Right’ leader, Jason Kessler, has been exposed as a supporter of former President Obama and the a hardline member of far-left Occupy movement.

When did he change his political leaning? According to the Southern Poverty Law Center (an organization that is certainly no friend to Conservatives), Kessler revealed his political transformation around November 2016, the same month Donald Trump won the presidential election.

If you think that is suspicious, wait until you learn about the other actors in this enormous set-up event.

First man on the scene

Brennan Gilmore was “on the scene” and was the author of the first viral tweet about Charlottesville. He was later interviewed by MSNBC. He was presented as an accidental witness. But who is he really?

Gilmore worked in Africa as a State Department foreign officer under Hillary Clinton. The New York Times mentioned this “coincidence” – and then later deleted it. Brennan Gilmore was also involved with the Kony hoax in 2012, and he is currently Chief of Staff for Tom Perrielo, who is running for Governor of Virginia and received $380k from George Soros.

So the first man on the scene, whose tweet went viral, and who was later interviewed on mainstream news as a witness, just happened to be a State Department insider with a long history of involvement in psy-ops? If you think this isn’t fishy, how about this – since the Charlottesville protests and his appearance in the media, his information was suddenly removed from State Department websites.

The elites know we are onto them, and they are trying to cover their tracks. They can censor Google and social media and close down accounts, but they will never be able to stop us sharing information and speaking to each other.