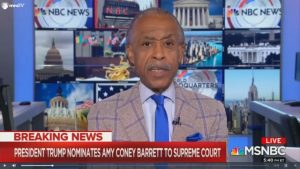 Back in 2018, during the confirmation hearings of Brett Kavanaugh for his appointment to the Supreme Court, the radical left really went all out to attack the man, drumming up all kinds of sexual assault allegations in order to try and stop him from being put on the bench.

The attacks against his personal and moral character, and on that of his family, were vile and disgusting. Which has led many folks to believe that there’s no possible way the left can sink any lower than that in their assaults against recent Trump nomination Amy Coney Barrett.

Famous race baiter Rev. Al Sharpton has decided to be lower than pond scum by singling out the black adopted children of Barrett.

Using the nominee’s two adopted Black children as some sort of prop, Sharpton sneered, “Not to mention, that was the least diverse audience I’ve ever seen in around announcement like this. I looked around — I was glad her two kids did come out, I couldn’t find too many other people of color in that audience.”

Earlier, host Nicolle Wallace embraced her inner conspiracy theorist and found a coded message in the nomination: “[Trump] made clear from the podium at the White House Rose Garden that he expects the justice to uphold our heritage, we all know what that means, and our Second Amendment rights. How do you think Donald Trump’s branding as someone who will uphold our heritage and our Second Amendment rights impacts the confirmation process.”

Barrett no doubt loves her children. All of them. Including the ones she adopted. The color of their skin is irrelevant. Barrett gave these two kids a loving home, rescued them from poverty and squalor, and is no doubt treating them as if they are her own.

What does it matter if they are black and she’s not? What matters is if the kids are loved and well provided for. But that’s not what the left cares about. The inherent racism in the radical progressive ideology, which remains hidden just below the surface of a false veneer of righteous crusader-like thinking, makes them focus on the color of someone’s skin rather than on more important factors, like personal character.

Here’s to hoping Barrett is appointed before the election so she can immediately get to work protecting our constitutional rights.