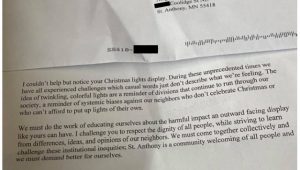 An unidentified resident of St. Anthony, Minnesota recently received an anonymous letter scolding them for having a Christmas lights display. This is the level of stupidity the radical left is now sinking to.

You’re no longer allowed to have a Christmas lights display because it “harms the community.” People are getting nuttier by the minute.

“The idea of twinkling, colorful lights are a reminder of divisions that continue to run through our society, a reminder of systemic biases against our neighbors who don’t celebrate Christmas or who can’t afford to put up lights of their own,” the letter, shared by Crime Watch Minneapolis, reads. “We must do work of educating ourselves about the harmful impact an outward facing display like yours can have.”

St. Anthony resident receives anonymous letter chastising them for their Christmas light display and calls it a reminder of "systemic biases against our neighbors who don't celebrate Christmas or can't afford to put up lights of their own."
It further calls the lights "harmful." pic.twitter.com/Xh11jbnswz

The letter then challenges the resident to “respect the dignity of all people, while striving to learn from differences, ideas, and opinions of our neighbors.”

“We must come together collectively and challenge these institutional inequities,” the letter concludes. “St. Anthony is a community welcoming of all people and we must demand better for ourselves.”

The letter was not well received by folks online. Many took to social media to share their thoughts on the letter including former Baltimore Ravens quarterback Derek Anderson who said, “Saw this coming a long time ago. ‘If I can’t have it, nobody can, or if they have it we all deserve it.’ That’s not life.”

Saw this coming a long time ago. “If I can’t have it nobody can” or “ if they have it we all deserve it” that’s not life.

Another user responded by saying they would add more lights.

How about the person who wrote the letter mind’s their own damn business? That’s a novel idea, right? Imagine a world where people didn’t stick their self-entitled noses into everyone else’s business?

This is a prime example of groupthink. These folks have no respect whatsoever for individuals. Everything has to be done altogether or not at all. It’s ridiculous.

What a person does to their own home is their business.