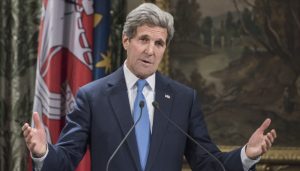 John Kerry is now facing calls from Republicans to resign from his position as the U.S. special envoy for climate change for allegedly chatting about Israeli military operations with Iran’s foreign minister.

The criticism being thrown in Kerry’s direction is due to a report that was released by the New York Times that discussed audio that was recorded in March that seemingly captured Iranian Foreign Minister Mohammad Javad Zarif stating that Kerry told him that Israel attacked Iran’s interests in Syria at least 200 times.

It’s not clear whether or not this conversation happened when Kerry was working as secretary of state under former President Barack Obama or during Trump’s time in office.

Trump Secretary of State Mike Pompeo led the calls for Kerry to be investigated, saying the tape proved “what I’ve said for years: that [Zarif] continued to engage with former Secretary of State Kerry on policy matters after Kerry’s public service and, according to Zarif, Kerry informed the Iranians of Israeli operations.”

Pompeo added: “Before we cut a deal with Iran that reduces Americans’ security, it would be good to know what the arrangement, if any, may have been between these two leaders.”

Nikki Haley, Trump’s ambassador to the United Nations, called the allegations “disgusting on many levels.”

“Biden and Kerry have to answer for why Kerry would be tipping off Iran, the number one sponsor of terror, while stabbing one of our greatest partners, Israel, in the back,” she posted on Twitter.

Sen. Dan Sullivan of Alaska stepped onto the Senate floor and demanded that Kerry step down from his position immediately.

“People are talking about treason — and I don’t throw that word around a lot,” Sullivan went on to state. “John Kerry does all kinds of things that I can’t stand. But this is the one that broke the camel’s back.”

Sen. Ted Cruz then added: “If this tape is verified, it would signal catastrophic and disqualifying recklessness by Envoy Kerry to Foreign Minister Zarif that endangered the safety of Americans and our allies.”

“And it would be consistent with his long pattern of empowering Iran’s regime,” Cruz added. “Kerry poured hundreds of billions of dollars into the Ayatollah’s terrorist bank accounts, was a close confidant with Zarif during the Obama administration, and was caught repeatedly meeting with him during the Trump administration (notwithstanding the Logan Act) — and has never publicly accounted for what they discussed.”

What Kerry did here, if it’s proven he did in fact have this conversation, is inexcusable. Not only does he need to step down, he needs to face some serious consequences for his actions. It’s horrific to think that Kerry might have been sharing information with Iran against one of our greatest allies in the Middle East.

We need to preserve that relationship if we want to fight against terrorism. Kerry put a lot of lives in danger, along with our relationship with Israel.