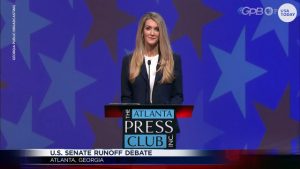 Former Republican Sen. Kelly Loeffler has started up her own voter organization in the state of Georgia that will have a primary focus on getting conservative-leaning voters out to the polls, as well as securing election integrity.

Loeffler, lost her seat to radical left-winger Raphael Warnock on January 6 in a runoff election that seemed to be very heavily influenced by the chaos surrounding the presidential election over the last several months.

The surprising Democrat gains in the Peach State have been largely attributed to voter outreach headed by failed Democratic gubernatorial candidate Stacey Abrams. As highlighted by The Daily Wire, however, the data to support such a claim is not clear.

Loeffler has reportedly dumped a seven-figure sum into the creation of “Greater Georgia” and will serve as chairwoman.

The group, according to Fox News, will “mirror” some of the functions of Abrams’ “Fair Fight Action” while “strengthening election security”and focusing on “election transparency and uniformity.”

“Our state is greater – and our democracy is stronger – when everyone’s voice is heard, and that’s exactly what Greater Georgia’s work is about,” Loeffler said in a recently penned statement.

“But for too many in our state, the importance – and even the sanctity of their vote – is in question,” she went on. ” That’s why we’re rolling up our sleeves to register conservative-leaning voters who have been overlooked, to regularly engage more communities, and to strengthen election integrity across our state.”

“Elections at every level have consequences – and we’re already seeing the consequences of recent elections play out in Georgia and across the country. Conservatives have a winning message, we just need to go out and share it with more people,” Loeffler said. “By registering new voters, broadening our outreach, and rebuilding trust in our election process, we can create better outcomes, strengthen our democracy, and lift up more voices in our state.”

The Greater Georgia group’s creation, as noted by Fox News, comes after many are beginning to suspect the disillusionment among Republicans about whether or not voting matters at all after Trump’s loss.