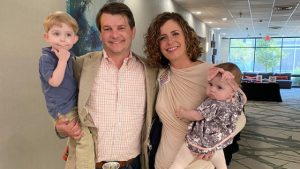 Rep.-elect Luke Letlow, who was just a few days away from being sworn in as the new representative for Louisiana, passed away on Tuesday due to complications related to the coronavirus.

Letlow himself had announced on December 18 that he had contracted the virus and began quarantining at home. The following day, he was admitted to St. Francis Medical Center, then transferred to the ICU at Ochsner-LSU Health Shreveport on December 23 as his condition continued to worsen.

LSU Health Shreveport Chancellor G.E. Ghali explained that Letlow died from a heart attack after a procedure related to COVID-19. “It’s devastating to our entire team,” he said. “He had no underlying conditions. It was just COVID.”

“The family appreciates the numerous prayers and support over the past days but asks for privacy during this difficult and unexpected time,” spokesman Andrew Bautsch said in a statement. “A statement from the family along with funeral arrangements will be announced at a later time.”

Letlow had won a December runoff race for the state’s 5th Congressional District, which included the cities of Monroe and Alexandria. He had filled the seat previously vacated by Ralph Abraham. Letlow previously worked for former Louisiana Gov. Bobby Jindal.

Send prayers and well wishes to the family, folks. This is going to be a hard one to get through.