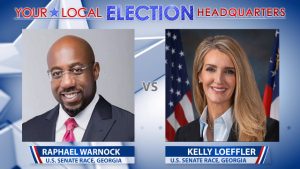 Things are getting very, very intense between Georgia Sen. Kelly Loeffler and her Democratic challenger, Raphael Warnock, as they both head into runoff elections to see who will be occupying that seat in the Senate.

A spokesperson who works for Loeffler recently called an allegation involving a case from almost twenty years ago “disgusting” and has demanded that Warnock address the situation.

Warnock, along with another minister, were accused of hindering an investigation that was looking into possibly child abuse that took place at a church-run camp back in 2002. The charges were dropped a few months later.

“It’s no surprise that as Reverend Warnock’s support grows, the false attacks start,” a Warnock campaign spokesperson told Fox News. “The truth is, he was protecting the rights of young people to make sure they had a lawyer or a parent when being questioned. Law enforcement officials later apologized and praised him for his help in this investigation.”

Warnock and the minister were charged after police said they got between officers investigating the abuse allegations and camp counselors, who were teenage church employees, according to the Baltimore Sun. Warnock said he was just making sure the teens were allowed to have a lawyer present during questioning.

When the charges were dropped, a prosecutor said the arrests came after “some miscommunication,” and that Warnock and the other minister “were very helpful with the continued investigation,” the paper reported.

Despite the charges being dropped, Loeffler has raised questions about the case, demanding that it be addressed by her challenger.

“What exactly was going on there?” Stephen Lawson, Loeffler’s spokesman, recently asked. “What was the nature of the child abuse? What was his involvement? If he wants Georgia voters to believe anything he says, he needs to come clean and explain what happened.”

Another tidbit that is definitely working against Warnock is the fact that before he started working at the church in Baltimore, he was working at one located in NYC that actually hosted and celebrated deceased Cuban dictator Fidel Castro.

Warnock’s campaign responded to this by stating that he was a junior member of the staff at that time and didn’t play a role in the visit from Castro, which happened during his 1995 trip to New York City where he was to address the United Nations.