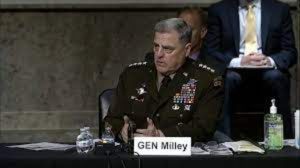 According to Reps. Louie Gohmert and Andrew Clyde, Gen. Mark Milley’s admission of calling up his Chinese counterpart and promising to warn him about possible impending attacks on his country while President Donald Trump was still ion office is an act of treason.

“We have no idea who is running this White House,” Clyde, R-Ga., stated during an appearance on Newsmax’s “Saturday Report.”

“We have no idea how decisions are being made about this country and our interest here at home and abroad. What Milley said was inexcusable. He needs to resign. He has been a dismal failure,” he continued.

Clyde commented Saturday that when Milley, as chairman of the Joint Chiefs of Staff, told Gen. Li Zuocheng, the chief of the Joint Staff Department of the Central Military Commission, that he would warn him of an impending attack from Trump, that would have been like the United States getting a warning from Japan in World War II of the attack on Pearl Harbor.

Meanwhile, Gohmert, R-Texas, noted that Milley both admitted under oath and to Bob Woodward and Robert Costa, the writers of the book “Peril,” that he spoke with his Chinese counterpart twice to appease their concerns about Trump.

“Words have meanings and the meaning of making the enemy comfortable under our constitutional definition of treason is giving aid and comfort to the enemy, and that’s exactly what Milley did,” Gohmert then said.

The Texas Republican then said that, “words have meaning” and that the generals weren’t clear on whether the generals warned President Biden of the real dangers of taking away all the troops from Afghanistan when they recommended that 2,500 be left in the country due to the fact he thinks “they were too gutless to do that.”