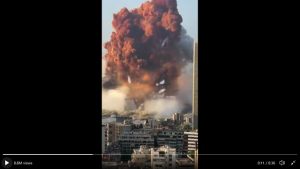 The capital city of the country of Lebanon just experienced a massive explosion on Tuesday afternoon according to initial reports being covered in the media.

Tons of video coverage of the incident is being plastered across Twitter and the footage is absolutely terrifying.

According to the Associated Press, the massive explosion appears to have occurred near the sea port, which connects the capital city to the Mediterranean Sea.

Videos circulating from purportedly after the blast show destruction in the city, although it is not clear how close these videos were taken in proximity to the site of the explosion.

This is shocking, and not even close to the last site. https://t.co/DJ9xPnqDuu

Here’s to hoping that injuries during this explosion were minimal and that investigators are able to get to the bottom of things as to what might have caused this to happen.