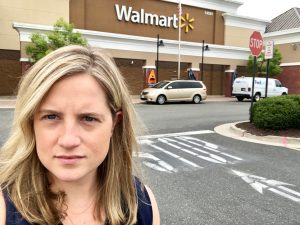 When you’ve got an agenda to push, never let a good crisis go to waste.

This, of course, is the unspoken motto of the far left after each and every mass shooting tragedy in recent memory, and boy has it gotten stale.

A fair amount of the raging lefty war cry against boomsticks has been lobbed at Walmart, that behemoth retailer who will never judge us when we show up at their door for ice cream, snow tires, pregnancy tests, betta fish, a new patio set, and maybe a new Remington at 3AM.

While the left doesn’t seem to mind what I do with all the other things on that list, they sure as heck don’t like that I can buy a deadly weapon just as easily as I buy a box of “cold pills” or, as David Hogg claims, even easier:

It’s harder to get cold pills than an AR-15.

Something needs to change.

I don’t remember the last time I needed a federal background check to buy some Sudafed, but okay.

The Batman to Hogg’s weak-jawed, gun-hating Robin, Sen. Cory Booker was eager to chime in on that time three dudes who work at Walmart staged a walk-out because guns are bad:

Thank you Walmart employees for demanding action. Walmart should use its power to stop selling guns in its stores until politicians and gun manufacturers get their act together and raise the standard for gun ownership in this country. https://t.co/Bw6k2VAuoA

With all the hate thrown Walmart’s way over its ingenious practice of selling virtually every earthly item anyone could ever need at any given time, including guns ‘n’ ammo, Hayley Peterson of Business Insider decided to test the leftist talking point that it’s as easy as they say to head on down to Walmart and grab a tommy gun:

I went to Walmart with the intention of buying a gun last week as part of an investigation into the placement, selection, marketing, and security of firearms in Walmart’s stores, and to learn more about the retailer’s processes governing gun sales.

My journey to bring a gun home from Walmart turned out to be far more complicated than I expected.

Like any good millennial, Peterson first went to Walmart.com to see what kind of bang machines the retailer had to offer, but found that not only does not every location actually sell them, the only guns listed for sale on the website are nonlethal airsoft guns.

Peterson then attempted to speak to a human at a local store to find more information:

The only guns advertised on Walmart’s website are air guns, which are nonlethal. After about 30 minutes, I gave up on searching the internet and turned to the phone.

I figured that employees at any one of Walmart’s stores near me would know which locations sold guns.

Over an hour and a half, I placed more than a dozen calls to multiple stores, waited on hold for a combined 40 minutes, and got through to a human only three times. Three Walmart employees told me they didn’t know which stores sold guns in the area.

Calling customer service didn’t work out, she continued, as the representative told her they weren’t allowed to discuss item availability of that type for reasons he apparently refused to explain. Finally, she managed to find a store that claimed it did sell guns:

Someone answered the phone at a Walmart Supercenter in Chesterfield, Virginia.

She transferred me to the sporting-goods department, where a woman on the line confirmed that I could buy a gun there.

The store was 30 minutes away. I got in my car and plugged the address for the Chesterfield Walmart into my phone.

Finally, Peterson made it to the store and, right behind the bike section, she found a rather sparse selection of guns:

A selection of about 20 rifles and shotguns was displayed in a locked glass case behind the sporting-goods counter. The guns ranged in price from $159 to $474.

The counter in front of the guns displayed pocket knives, binoculars, and digital night-vision monoculars inside a locked case.

The selection of guns was limited compared with nearby gun stores, which offered dozens of different kinds of firearms, including handguns.

Peterson noted that there were no advertisements for guns in the store and that signage at the counter indicated that she was on camera that a manager would be called if she requested to purchase a gun.

The manager then told Peterson that she would have to come back in a couple of days to purchase the firearm as no licensed firearm seller was working in the store that day. She was told later that Walmart employees have to be legally qualified to sell firearms, which includes passing background checks and undergoing proper training.

Peterson was, however, able to at least look at a gun. Woohoo!

She also noted the cautious manner in which the guns were locked up and secured, including zip ties that needed to be cut and replaced after every removal. She also found that an employee must escort you to your vehicle after your firearm purchase.

Undaunted, Peterson returned a few later to buy her gun. The saleswoman walked Peterson through the process, had her pay $2 for her background check fee, and began filling out the paperwork.

Just when you think the story is finally coming to an end and Peterson can go home with her shiny new boomstick, tragedy strikes: Peterson’s address didn’t match the one on her driver’s license:

That was a problem, [the saleswoman] said.

To pass the background check, I would need to bring in a government-issued document with my correct address, such as a bill from a state-owned utility or a car registration. (I have never bought a gun, so I wasn’t aware of this.)

She apologized, told me the rules were strict around background checks, and asked me to come back another time to finish the purchase.

At that point, Peterson had just about enough of the whole ordeal and decided that buying a gun from Walmart is too hard for her.

If you ask me, the three biggest takeaways from this little incident are that Walmart could run a little more efficiently, Peterson needs a lesson in perseverance, and David Hogg and Cory Booker are full of [expletive deleted].