Reporter Asks Trump If He Worked For Russia, Immediately Gets Destroyed 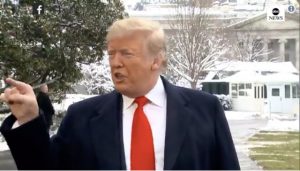 One of the things folks seem to absolutely adore about President Trump is how he brutally puts the mostly left-wing mainstream media in its place after asking him foolish, stupid questions.

The media has been unhinged for far too long, so now that someone like Trump, who doesn’t take crap from pretty much anyone, gets down to the nitty gritty with biased reporters, it’s an awesome sight to behold.

A reporter recently attempted to ask Trump if he worked for Russia amid a new report from the New York Times that says the FBI investigated whether or not Trump’s firing of then FBI Director James Comey was the result of the president answering to the Russian government.

It probably goes without saying, but this reporter got destroyed.

“I never worked for Russia,” Trump told reporters before leaving the White House for a trip to New Orleans.

“And you know that answer better than anybody,” Trump said. “Not only did I never work for Russia, I think it’s a disgrace that you even asked that question because it’s a whole big fat hoax.”

“Agents and senior F.B.I. officials had grown suspicious of Mr. Trump’s ties to Russia during the 2016 campaign but held off on opening an investigation into him, the people said, in part because they were uncertain how to proceed with an inquiry of such sensitivity and magnitude,” The New York Times reported on Friday. “But the president’s activities before and after Mr. Comey’s firing in May 2017, particularly two instances in which Mr. Trump tied the Comey dismissal to the Russia investigation, helped prompt the counterintelligence aspect of the inquiry, the people said.”

Trump went on a Twitter tirade in response to The New York Times’ report, slamming multiple former FBI officials who have been fired.

“Wow, just learned in the Failing New York Times that the corrupt former leaders of the FBI, almost all fired or forced to leave the agency for some very bad reasons, opened up an investigation on me, for no reason & with no proof, after I fired Lyin’ James Comey, a total sleaze!” Trump tweeted.

Trump added: “….the FBI was in complete turmoil (see N.Y. Post) because of Comey’s poor leadership and the way he handled the Clinton mess (not to mention his usurpation of powers from the Justice Department). My firing of James Comey was a great day for America. He was a Crooked Cop……”

“…..who is being totally protected by his best friend, Bob Mueller, & the 13 Angry Democrats – leaking machines who have NO interest in going after the Real Collusion (and much more) by Crooked Hillary Clinton, her Campaign, and the Democratic National Committee,” Trump continued. “Just Watch!”

At the end of the day, these reporters simply have it out for the president. They are hoping beyond hope that something is found in the Mueller investigation that will lead to his impeachment and removal from office. That’s been their goal since day one of Trump’s administration.

It’s sad that these people are pouring all of their effort and energy into destroying the president instead of working with him to help improve the status of our country and its citizens.

Let’s hope that after this is all over, these folks move on and actually attempt to do their actual jobs.