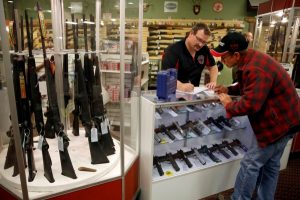 Well, this is concerning.

At a time when the emotional and political rhetoric surrounding border security is at a fever pitch, it’s important to look at the cold, hard data that supports the case for border security.

It wasn’t that long ago that any American would have fully understood the need to make sure that whoever crossed into our nation did so with our knowledge.

And considering those who have broken the law either entered our country or remained here, it’s not too surprising that they’re breaking the law in other ways as well.

Thankfully, we have a federal background check system for purchasing firearms that prevents them from (legally, at least) practicing the rights afforded to actual U.S. citizens: like keeping and bearing arms.

Of the over 7 million illegal immigrants with active NCIS records, a record high, according to the FBI, some 3,000+ were denied firearm purchases in 2017.

The FBI this year has barred a record number of cases of illegal immigrants from buying guns, according to a new report of background checks.

That number has been increasing in recent years.

Illegal immigrants rank at the top of those on the FBI’s “prohibited category.”

Estimates of the number of illegal aliens living in the US falls somewhere between 11 million and 16 million, so this is obviously a staggering number of aliens with NCIS records.

Of course, granted that these folks were willing to just hop over the border of a sovereign nation, what’s to stop them from buying a gun from someone other than an FFL?

And with an open border, what’s to stop the black market firearms trade from continuing to flourish, along with the organized crime syndicates that create the criminal infrastructure to support it?

Look, everyone deserves a chance to live in the U.S. and practice the sacred rights protected for citizens. But they have to go through the proper channels like the millions of hard-working immigrants who wait their turn, obey our laws, and respect our country.

Meanwhile, let’s just add this to the long list of reasons why we should go ahead and build that wall.